Trade View - Automate your Forex System without coding a single line
Home  »  Market Anakysis   »   Analysis and trading ideas for AUD/USD as of January 23, 2020

After the Australian Bureau of Statistics reported today at 01:30 (London time) that the unemployment rate in the country fell to 5.1%, contrary to forecasts that unemployment will remain at 5.2%, the Australian currency perked up and even at the time of writing shows a significant strengthening. Since no more macroeconomic statistics from Australia will be published this week, the AUD/USD currency pair will be influenced by technical factors and external background. For example, the price dynamics of this currency pair may be affected by the situation of a very dangerous and not yet fully understood virus that is gaining strength in China. Let me remind you that China is Australia’s largest trading partner, so everything that happens in China is reflected in the Australian dollar to some extent.

However, as I wrote above, this is not particularly important data, so all attention, in my personal opinion, should be paid to the charts of the AUD/USD currency pair. 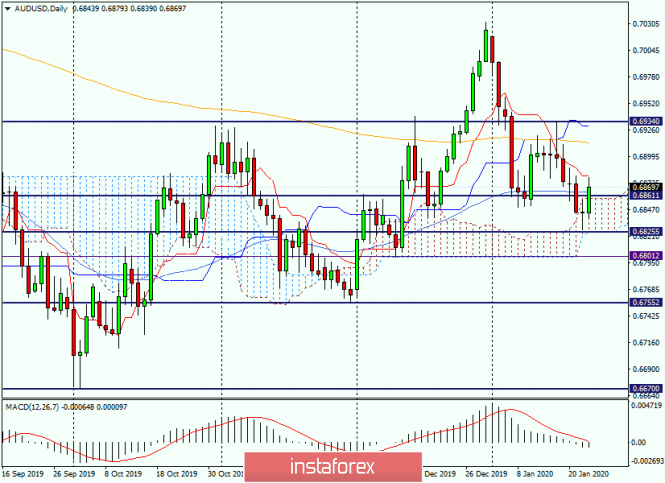 The picture that is observed on the daily chart demonstrates the pair’s reversal in the north direction, which we observe at this stage of time. First of all, this is indicated by the “Rickshaw” candle, which appeared on January 22.

As you can see, the pair entered the limits of the Ichimoku indicator cloud. As a result of today’s growth, the quote is trading above the upper border of the cloud and the strong Kijun line. The next obstacle for the “Aussie” bulls will be the Tenkan line, which runs at 0.6881.

Closing today’s trading session above Tenkan will give reason to expect further growth to 0.6913, where the 200 exponent passes, and possibly higher, to the Kijun line, which is at 0.6930. In my opinion, it is premature to talk about the further promotion of the pair to the top. First, let’s see how the “Australian” will pass the designated obstacles, and whether it will pass them at all.

As for the targets at the bottom, everything will depend on the ability to break through strong support in the area of 0.6856-0.6850, where the lower border of the Ichimoku indicator cloud passes very close. If the AUD/USD bears manage to push the pair down from the cloud and gain a foothold under it, the sellers will have control over this instrument. In this case, the next extremely important mark at the bottom will be a strong level of 0.6800, on the passage of which the prospects of the instrument will depend. 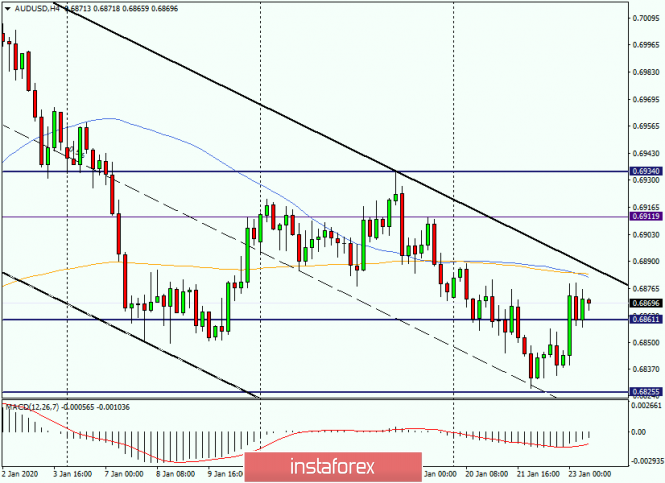 On the four-hour chart, I built a downward channel with the parameters: 0.7032-0.6934 (resistance line) and 0.6850 (support line. At the moment of writing, AUD/USD is trading at the top of the channel, but to leave it up, you need to penetrate not only the upper border but also simple 50 and 200 exponential moving averages, which may provide additional and strong enough resistance in moving prices up. Technically, this is a pretty good point to open short positions, however, the strong data on unemployment in Australia and the technical picture on the daily chart indicating a reversal of the pair do not inspire much optimism in terms of sales.

On the other hand, purchases under the moving averages and the channel’s resistance line cannot be called an actual trading decision. Thus, based on the technical picture considered on the daily and four-hour charts, you can try the following trading plan.

When it comes to purchasing – we are waiting for a true breakdown of 50 MA, 200 EMA and the upper border of the channel, then on the rollback to the broken line and moving averages, we buy in the hope of continuing growth. We are looking for purchases at more attractive and low prices after the pair’s decline to the area of 0.6855-0.6850.

That’s probably all. I wish you successful trading and profitable transactions!