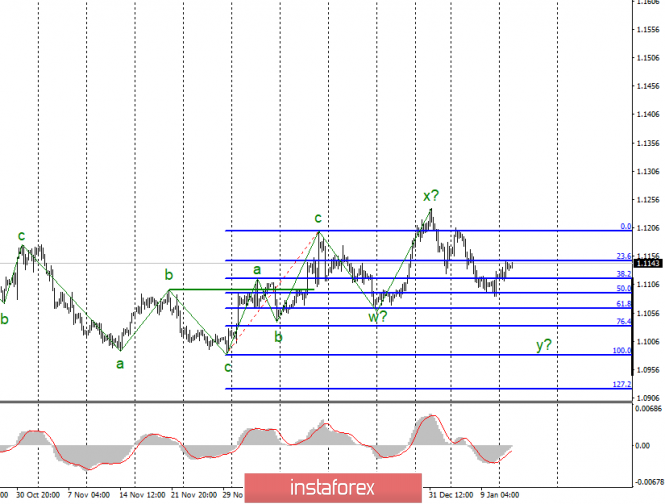 On January 13, the EUR / USD pair gained about 15 basis points. However, the current wave marking remains the same, and I expect the instrument to turn down and go down as part of an unfinished downward wave y again. If this assumption is correct, then an unsuccessful attempt to break through the 23.6% Fibonacci level or a MACD signal “down” will indicate the readiness of the instrument for a new decrease. The wave pattern still does not look convincing enough, since there has not been a pulsed 5-wave segment of the trend for a long time.

There was no news background for the euro-dollar instrument on Monday. Not a single economic report came out over the past day, and the attention of the markets was turned to Britain, where important economic data were published. Meanwhile, the euro continued to seize the moment and continued to move away from the lows reached since there were no new weak data from the European Union. At the same time, I still expect the quotes of the instrument to decline due to the unfinished form of the wave y. Therefore, today, I hope for the help of the inflation report, which will be released this afternoon in America. According to market expectations, inflation in December will increase from 2.1% to 2.3%, which will certainly be regarded by the markets as a bear factor for the euro / dollar. Thus, we need a strong consumer price index in America to resume building the wave y. There is no other news on the calendar today. The political background remains unchanged and comes down to topics with impeachment by Trump and the Senate considering this case this week, a conflict with Iran, which seems to be put on hold and the expectation of signing a trade agreement between China and America from day to day. The signing of the agreement, by the way, can also support the dollar and cause additional demand for this currency. Still, the end of the conflict with China is good news for the US economy.

The euro-dollar pair allegedly completed the construction of the upward trend section. Thus, I would recommend resuming sales of the instrument with targets located near the levels of 1.1034 and 1.0982, which corresponds to 76.4% and 100.0% Fibonacci. Meanwhile, the MACD signal “down”, which indicates the readiness of markets for building a new downward wave of y. 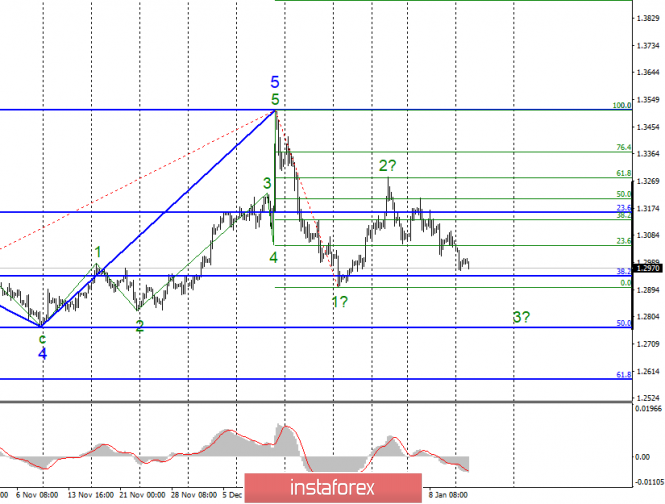 On January 13, GBP / USD lost another 70 basis points and continues to build the alleged wave 3 as part of the bearish trend section, which may still turn out to be 3-wave. However, I believe that an impulse wave structure consisting of 5 will be built. Thus, quotes should minimally fall below the 29th figure. This will be enough for wave 3 to identify as well as with C.

The news background for the GBP / USD instrument on Monday was very important for the British currency, as the most important and significant economic reports for December were released. It turned out that GDP for this month “managed” to lose 0.3% immediately, although markets expected 0.0% and industrial production declined 1.6% y / y, which is also much worse than market expectations. In principle, this can end the description of yesterday’s news background, since after such failures there can be no talk of any increase in the “Briton”. Thus, wave 3 has the necessary news background to continue its construction. Moreover, today, this news background may intensify even more in the case of a strong report on inflation in the United States. Thus, the hopes of the pound / dollar instrument buyers are connected with the expectations of a weak report from America, otherwise, the instrument can already make a successful attempt to break the level of 1.2943, which corresponds to 38.2% Fibonacci.

The pound / dollar instrument continues to build a new downward trend. I recommend continuing to sell the instrument with targets near the level of 1.2764, which corresponds to the Fibonacci level of 50.0%. On the contrary, an unsuccessful attempt to break through the 38.2% Fibonacci level may lead to a small departure of quotes from the lows reached.