Trade View - Automate your Forex System without coding a single line
Home  »  Market Anakysis   »   Analysis of EUR/USD and GBP/USD on January 30. Market expectations for the Bank of England’s rate were not met! 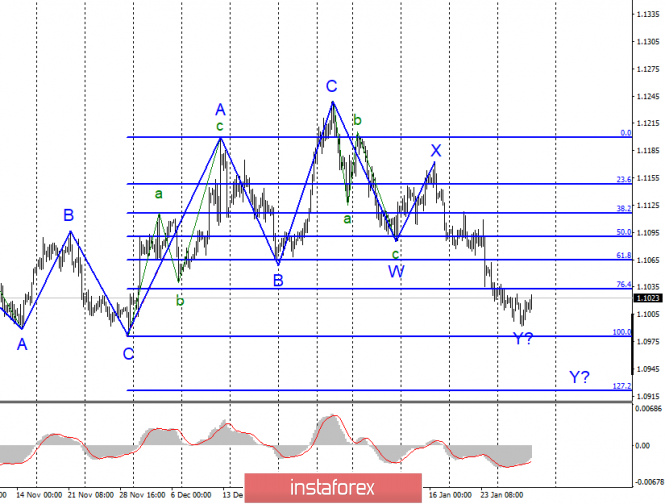 On January 29, the EUR/USD pair lost about 12 basis points and started moving away from the previously reached lows. Thus, there are reasons to assume the completion of the wave y construction. If this is true, then the tool will start building an upward set of waves from the current positions, consisting of at least three waves. If the wave y becomes more complicated, it will be possible to determine the market’s readiness to continue selling the euro currency by a successful attempt to close under the 100.0% Fibonacci level.

The news background on Wednesday was very much expected by the markets, but it turned out to be empty. Hopes were pinned on the evening’s summing up of the Fed meeting. Hopes that the Fed will orient the markets in its plans for the near future. However, Jerome Powell and the organization that serves as the Central Bank in the United States were surprisingly banal and predictable. Nothing of interest to the markets was announced. The Fed limited itself to leaving rates unchanged and made several statements regarding the current economic state of the country and individual indicators. Nothing has changed since the December meeting. Jerome Powell again noted moderate but steady economic growth, a strong labor market, high employment, low unemployment, and inflation that has reached target levels in recent months. At the same time, Powell noted the risks associated with the new “coronavirus”, which has already spread from China to Europe, America, and Australia. In this regard, communication between some countries may be disrupted, which, of course, will lead to a drop in business activity, which in the manufacturing sector of the EU and the US remains low. Thus, the “coronavirus” can slow down the world economy if it does not find a cure soon or if it does not manage to spread its distribution. Powell also noted that the current monetary policy does not need to be revised and is sufficient to ensure stable economic growth in the United States.

The euro-dollar pair presumably completed the construction of a descending set of waves before reaching the mark of 1.0982, which corresponds to 100.0% of Fibonacci, some 10 points. The construction of the wave y may resume, but based on the size of the W and X waves, the conclusion is still about the completion of this wave. Thus, I recommend selling the instrument only if you successfully try to break the mark of 1.0982 with the target of 1.0922. 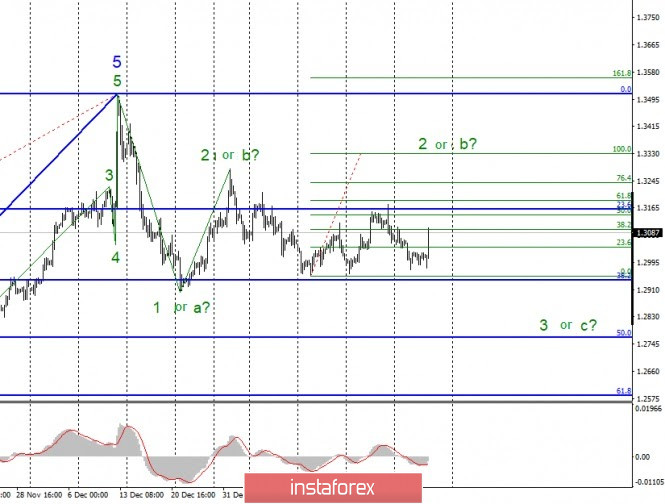 The GBP/USD pair lost several base points on January 29 and continued to decline within the expected wave 3 or C or complicated wave 2 or b. Already today, after the first results of the Bank of England meeting became known, the Briton began to increase, quite rapidly, thus, hopes for a continued decline in the instrument’s quotes within the wave 3 or C collapsed. For some time now, the pound-dollar instrument can continue to trade between 23.6% and 38.2% Fibonacci levels (blue grid).

The news background for the GBP/USD instrument on Wednesday was the same as for the EUR/USD instrument. There was no market reaction to Jerome Powell’s statements and the Fed’s decision to leave the rate unchanged. But today, similar decisions of the Bank of England were followed by rapid purchases of the British, as the markets expected more “dovish” results. The Bank of England could have lowered the key rate, the number of members of the monetary policy committee who voted for its reduction could have increased, but none of this happened. Thus, expectations were high, but they were not met at all. Within the next half hour, a report on GDP for the fourth quarter will be released in America, which may once again cause a storm of emotions in the market and a change of direction. I recommend that you be careful with this report. There is also a speech by Bank of England Governor Mark Carney, which may also feature interesting theses.

The pound-dollar tool continues to build a new downward trend. Just a few points short of the mark of 1.2940 (38.2% Fibonacci), the instrument started to rise sharply, making the current wave markup even more complicated. Thus, I now recommend selling the pound only after a successful attempt to break the mark of 1.2940 with a target located around 1.2764, which is equal to 50.0% for Fibonacci.