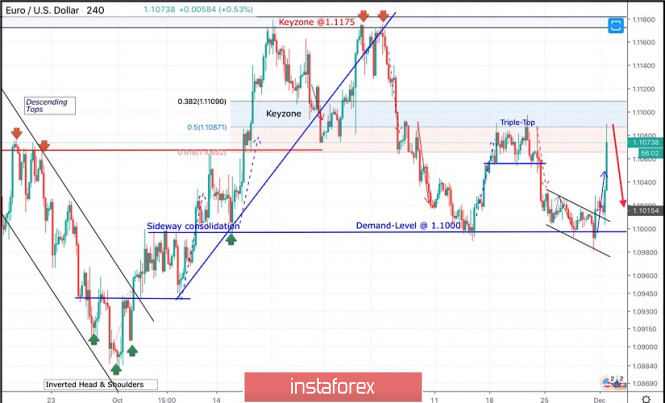 On October 2, an Inverted Head & Shoulders reversal Pattern was demonstrated around 1.0880.

Since then, the EURUSD pair has trended-up until October 21 when the pair hit the price level of 1.1175.

The price zone of (1.1175 – 1.1190) stood as a significant SUPPLY-Zone that demonstrated bearish rejection for two consecutive times in a short-period.

Hence, a long-term Double-Top pattern was demonstrated with neckline located around 1.1075-1.1090 which offered valid bearish positions few weeks ago.

That’s why, initial bearish decline was executed towards 1.1025 and 1.0995 where another episode of bullish pullback was initiated.

Supply-Levels around 1.1065-1.1085 demonstrated significant bearish rejection that brought the pair back towards 1.1000 where a short-term flag pattern was demonstrated.

Previous price action suggested a high probability of bullish reversal around 1.1000 that brought the EURUSD pair again towards 1.1065-1.1085 as expected.

Thus the Pair remains trapped between the price levels of 1.1000 and 1.1085 until breakout occurs in either directions.

Initial bearish rejection should be anticipated around 1.1085 to bring bearish decline towards 1.1020.