It seems that the situation with Chinese SARS was seen by investors as a reason for taking profits, and then the same reason for buying shares of companies.

It can be recalled that on Tuesday, world markets suddenly became preoccupied with the risk of the spread of SARS, which appeared in China. In turn, investors regarded this as a kind of risk that could spread to other countries, which could cause a decline in market activity. Therefore, stock indices showed a negative trend on Tuesday, quotes of oil declined, as did gold prices, but the US dollar received local support.

But is it really so?

In our opinion, such market behavior is unlikely to depend on events in Asia. Yes, they are unpleasant, and yes, they can have an impact on investors, as was the case with rabies in Britain in the zero years and outbreaks of SARS in Europe, but this only led to local movements and was used by market players as an excuse for profit taking with the subsequent entry into the market. Thus, we believe that something similar is happening now.

In our opinion, there are fundamental reasons for the continuation of the rally in the stock markets and the gradual weakening of the US dollar. The Fed’s monetary policy remains the main one, which actually returned to the hypostasis soft last September. It is also called quantitative easing (QE) without an actual announcement, because it is essentially such. The second reason can be called the risk of termination of soft monetary policies and their gradual tightening in economically developed countries. For example, in Sweden, the local Central Bank raised the level of the key interest rate from a negative mark to zero. The ECB, led by C. Lagarde, is likely to change its strategic outlook on monetary policy, which, according to the markets, will be announced on Thursday at a meeting of the regulator.

In other words, the markets consider the position of the dollar to be weaker because it is already at local highs, and currencies such as the euro, sterling, commodity currencies have their local minimum values. In fact, we can say that only the factor of geopolitical tension provides support to the dollar, and with a certain decrease in its degree, the dollar can gradually lose ground.

Today, the attention of the market will be focused on the publication of consumer inflation data in Canada and sales in the secondary housing market in the United States. And, of course, to the final decision of the Central Bank of Canada on monetary policy. It is assumed that the regulator will leave rates unchanged.

Forecast of the day:

The USDCAD pair has every chance to turn down if, at the end of the meeting of the Central Bank of Canada, not only the level of interest rates is preserved, but also a signal is given that we should not expect their further decline. In this case, the pair may decline to 1.3040.

It seems that the gold on the spot will consolidate in the range of 1539.40-1568.72 in the absence of clear and clear impulse for both increase and decrease. 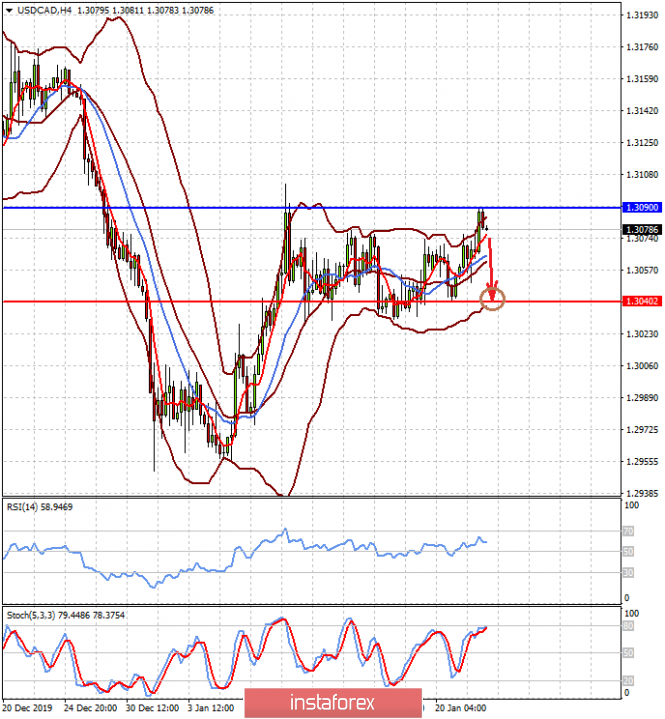