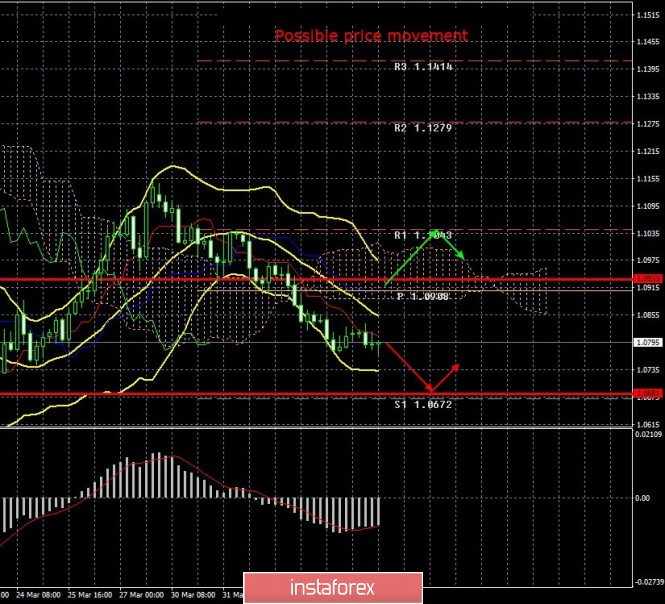 Average volatility over the past five days: 126p (high).

The first trading day of the week for the EUR/USD pair was held in absolutely calm, Monday trading. Like at a time when there was no epidemic of coronavirus yet, and panic did not engulf the currency, commodity and stock markets. The euro/dollar pair has passed only 68 points during the day. And this is absolutely the lowest figure for the past month and a half. Thus, we can confidently say that market participants continue to calm down after an almost one and a half month period of chaos and panic. This conclusion suggests that in the near future the markets will begin to recover. And so far, it is precisely and only about restoring markets, not the economies of the United States or the European Union. Markets are tricky, but even during a pandemic and crisis, they cannot contract and fall constantly. We need, so to speak, upward corrections. Whoever says anything, the number one energy price in the world — oil — cannot be $20-25 per barrel. Theoretically, this is possible. For a short period of time, but not constantly, and not in for the long term. Oil prices have already begun to recover, because no matter how production declines, no matter how the transportation sector in each country of the world decreases due to quarantine, no matter how the demand for gasoline, fuel and oil itself decreases, it is not profitable to pump oil and only make a couple of dollars from one barrel. After all, it is absolutely obvious that there is no point in selling the most valuable asset at cost. The only problem is that large market players cannot always agree among themselves, but low prices are not profitable for all miners, and behind them, as a rule, are powerful countries that have influence in the international arena. Thus, we believe that the oil market will recover.

The latest news about the spread of the coronavirus also suggests that the epidemic is beginning to subside in Europe. Growth in some countries has been contained. For example, Italy is no longer a hotbed for the spread of the COVID-2019 virus, and Spain came out on top in Europe. However, in Spain, sooner or later, the incidence will decrease. Thus, for the first time in a long time, it is really possible to say that the epidemic can be localized in every country by introducing a strict quarantine. These are just the first steps on the way to complete victory over the virus. But they are done, which means that there are no new reasons for panic in international markets. The United States is the leader in the number of diseases in the world, New York in particular, which has become a hotbed of infection overseas. Following a series of pessimistic forecasts of 200,000 deaths in America, Donald Trump has finally made a statement that can support the US population. “We see a light at the end of the tunnel,” Trump said during a regular briefing at the White House. “We hope that in the near future we will be very proud of the work done. It is impossible to be happy when so many people die, but we will be very proud of the work we have done to minimize the death rate,” the US president said.

We would now like to review economic reports or analyze one or another aspect of the US or EU economy. However, unfortunately, on Monday, April 6, no important macroeconomic information was available to traders. Moreover, in addition to regular reports on the state of the economy of a particular country, no important economic information is now available to traders. The reason is simple – quarantine. The number one problem in the world right now is the epidemic. Losses from the pandemic will be calculated later. Now we need to stop the spread of the virus and minimize the negative effects on the economy. So, in fundamental terms, there is not much to talk about right now. Moreover, traders persist in ignoring any reports… 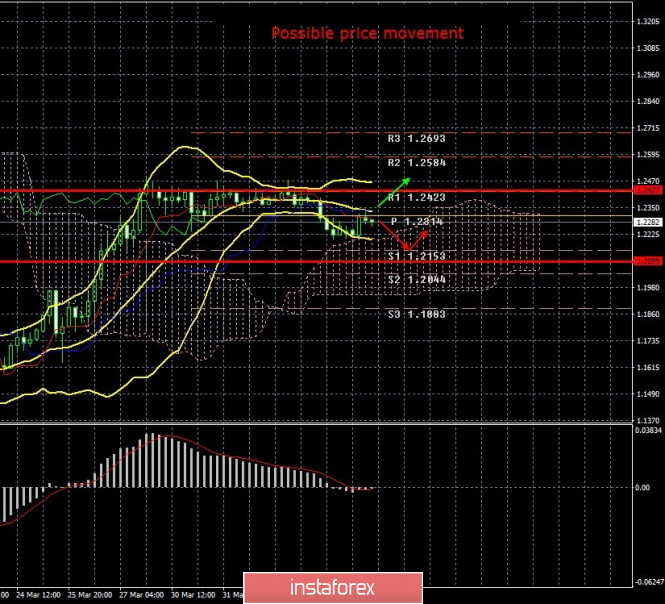 The GBP/USD currency pair continued its slurred movement on April 6. The pound/dollar pair seems to have resumed a downward trend on Friday, but as it was shown on Monday, traders have little desire to continue selling pounds. However, a price rebound from the critical Kijun-sen line could trigger a resumption of the downward movement. Most likely, not as strong as before. The average volatility over the past two weeks has decreased to 164 points per day, however, for example, today, the pair managed to pass only 117 points. This is still a lot, but it can not be compared with the previous values. Bollinger Bands are now directed sideways, and the MACD indicator is located near zero. Both indicators, thus, indicate the absence of a trend movement, in other words, flat. There were no important macroeconomic publications in the UK today. Only the index of business activity in the construction sector, which expectedly fell from February 52.6 to 39.3. No important statistics are also expected in the United States and Britain tomorrow, so volatility may continue to remain low (in current realities), and there may be no trend movement.

The EUR/USD pair maintains the prospects for a downward movement on the 4-hour timeframe, even though the MACD indicator has turned up. Nevertheless, the price continues to be near local lows, so there is no correction as such now. Thus, in euro sales, it is recommended to remain until the MACD indicator turns up (with a parallel increase in price) with the target of 1.0681.

It is recommended to buy the EUR/USD pair before consolidating the price above the Kijun-sen line, which will indicate the resumption of an upward trend. The first goal in this case is the resistance level of 1.1043.

The pound/dollar is trying to resume a downward movement. Thus, it is recommended to sell the pound in small lots with targets at levels 1.2153 and 1.2099, especially in case of a rebound from the critical line. At the same time, one should remember the high probability of a flat.

It will be possible to buy the GBP/USD pair before consolidating the price above the critical line with the first target level of volatility of 1.2427. Also in small lots.