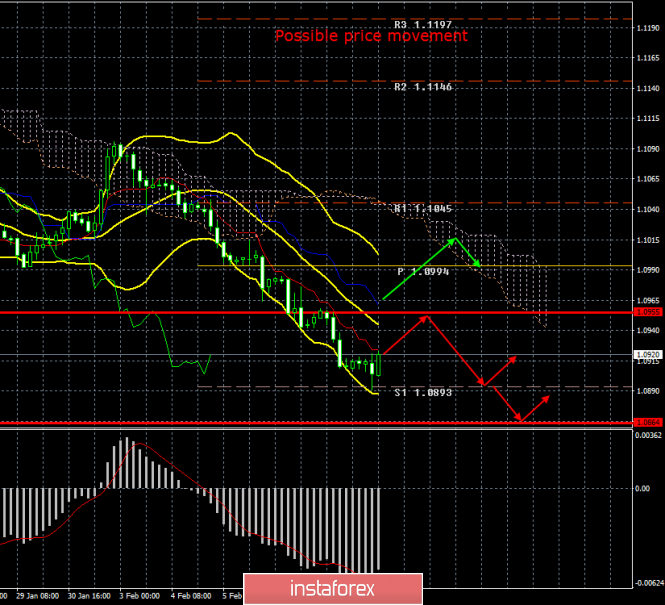 Average volatility over the past 5 days: 46p (average).

The EUR/USD currency pair perfectly worked out the support level of 1.0893 on Tuesday, February 11 and rebounded from it, failing to gain a foothold below. Thus, the long-awaited correction could begin today, which we were waiting for on Friday and Monday. This is not to say that today the correction was expected, and the fundamental background contributed to its beginning, since the only important events that are planned at the moment are speeches of the ECB President Christine Lagarde in the European Parliament and Jerome Powell in Congress . Moreover, Lagarde’s speech has not even begun. Not a single significant macroeconomic publication has been planned for today in either the United States or the European Union.

Recently, we regularly focus traders on weak industrial production. This applies to the European Union and the United States. We also noted that Fed Chairman Jerome Powell stubbornly does not want to address in his speeches the subject of a drop in GDP growth rates and a reduction in industrial production. However, speaking to Congress, Powell could not ignore these topics. True, he illuminated them quite superficially. According to Powell, who spoke today to the House Financial Committee, the US economy is in excellent condition. The expansion has been going on for 11 years, which is a record for the country. Powell noted that in 2019, the economy staunchly confronted all global risks. Thus, according to the Fed chief, lowering the key rate in the near future is not required. The Fed chairman notes the stabilized global economic growth, as well as lowering trade uncertainties. However, Powell notes the seriousness of the spread of the “coronavirus.” As we said in previous reviews, the coronavirus can cause a slowdown in the Chinese economy, which is closely linked with the US economy and many other economies. This is precisely the opinion held by Powell himself, believing that a pandemic is a dangerous factor for the global economy. In addition, the Fed chairman noted the good condition of the labor market, higher rates of the number of created jobs than expected. However, according to Powell, some problems in the labor market are still present, such as inequality between different racial and ethnic groups. But regarding productivity, Powell said that “it remained at a low level.” Thus, according to Powell, the search for options to increase productivity should remain a national priority. In the second half of 2019, weak exports and investments, as well as industrial production, were noted due to uncertainty with trading partners. Powell also notes that inflation is not high enough in 2019 and hopes that it will approach the target of 2.0% in the coming months (we are talking about the consumer spending index for personal consumption).

What conclusions can be drawn from Powell? Firstly, he did not surprise traders by delivering exactly the speech that they expected to hear from him. Secondly, tomorrow during the second speech to Congress, most likely, the rhetoric and content of Powell’s speech will not change, respectively, and on February 12 you should not expect any market reaction to this event. Thirdly, Powell believes that the spread of the pneumonia virus in China can have a serious negative impact on the global economy, and the Fed itself is not going to interfere in monetary policy. From this we can also conclude that the Fed is satisfied with the current levels of GDP and industrial production, at least the regulator does not see anything dangerous for them in the economy. Powell also noted that the Fed will not go to change the key rate, only if key macroeconomic indicators begin to decline. Thus, in the near future you should not expect any action from the Fed.

Now it remains only to wait for Lagarde’s speech and ensure that her rhetoric will not differ from the expectations of the markets. The main thing is that there are no new ones among Lagarde’s theses that reflect more serious concerns about the prospects for the EU economy. Any new tension may again lead to selling the euro.

From a technical point of view, one cannot even say that the correction has begun. The pair rebounded from 1.0893, but a strong departure of quotations to the top has not yet occurred. The MACD indicator, however, has already turned up, reacting to a banal price drop. That is, the indicator has now begun to discharge.

EUR/USD continues to move down. Thus, it is now recommended that you keep selling the euro while aiming for a support level of 1.0893. A price rebound from this level allows you to close sell positions. You can hold shorts with the target of 1.0864. It will be possible to consider purchases of the euro/dollar pair in small lots with the goal of the Senkou Span B line, if traders manage to gain a foothold above the Kijun-sen line, which is not expected in the near future.