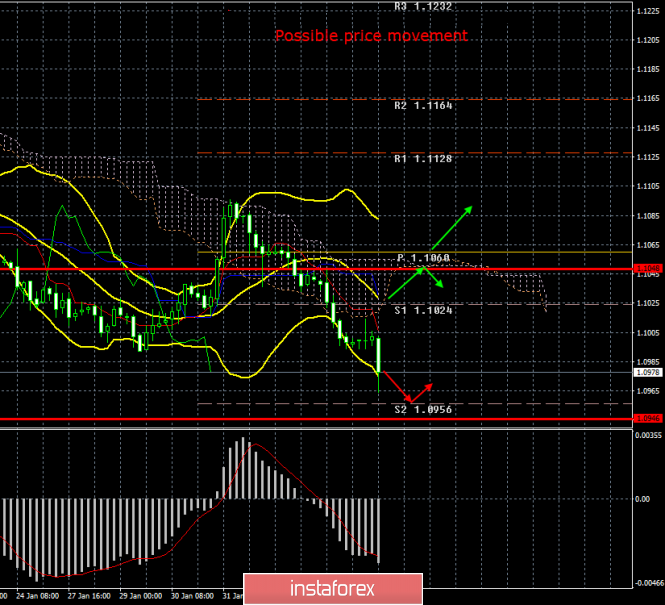 Average volatility over the past 5 days: 51p (average).

During the last trading day of the week, the EUR / USD currency pair resumed its downward movement, without even being able to correct normally against a three-day fall. Thus, the euro continues to become cheaper against the US dollar and entered the 100-point zone before the two-year low of the pair. At the same time, previous local lows have been broken through and updated today. Here, we are talking about the lows of November 14, November 29 and January 29. Thus, formally and from a technical point of view, nothing should prevent the European currency from continuing to decline. However, we continue to insist that a reversal to the top and another upward correction of the pair are very likely in the area of 1.0879 – 1.0979, which is just based on the fact that the bears will refuse to sell the euro again at such low price values. Let’s see how it will be this time. This factor cannot work in favor of the European currency forever. Sooner or later, the bears will surrender and continue to get rid of the euro, moving the pair even further down to price parity with the US dollar.

For today, macroeconomic statistics can be considered to have been non-existent. Several minor reports in Germany and the USA were published, which did not cause much attention from the participants. The most interesting was the report on production orders in Germany, which collapsed by 8.7% in annual terms and 2.1% in monthly terms in December. This mainly means that the industrial sector of Germany – the leading economy of the European Union – remains in an unfortunate state, despite a slight increase in business activity, judging by the latest data. This also indicates that industrial production in Germany may continue to slow down, because if orders are reduced, then production volumes are reduced. Well, and accordingly, we may well expect a reduction in the pan-European indicator of industrial production, on which very much depends, for example, GDP, which in the Eurozone has already recently declined to 1%. In general, the report itself did not seem to cause additional pressure on the euro, but showed how bad things are in the Eurozone once again. Nevertheless, the euro later continued its decline anyway.

Meanwhile, ECB Chairman Christine Lagarde made a second statement today. Her speech yesterday was almost entirely devoted to the “coronavirus” and its possible impact on the world economy. Here are the obvious conclusion from Christine’s speech: the world economy began to feel relief after signing a trade deal between China and the United States, but the coronavirus almost completely eliminates the entire positive effect of this deal and adds a huge number of potential risks and threats to the global economy. Today, the head of the ECB discussed the topic of monetary policy and, it seems that the euro currency went to dominate the downside again after her statements. In addition, the Chairman of the European Central Bank noted that low interest rates and weak inflation significantly limit the ability of the regulator to influence monetary policy. And in the event of an economic downward turn caused by for example, with the coronavirus or a new escalation of the trade war between China and the USA, the ECB, like other world banks, will not be able to effectively and fully oppose it. In fact, Lagarde acknowledged that the EU economy already has serious problems, the Central Bank has almost completely exhausted its arsenal of available tools to stimulate the EU economy; however, mostly all measures had only a temporary positive effect. Lagarde also said that “the economy of the Eurozone continues to grow, but at a slow pace, stable domestic consumption is supporting the economy of the European Union, the basic economic indicators of the Alliance are gradually improving.” In this statement, from our point of view, Lagarde tried to calm the markets a little but she did not succeed.

After today’s events, we can only emphasize the weakness of the Eurozone economy once again and the much more optimistic state of the US economy. No matter how Donald Trump boasts about the achievements of his administration, it should be recognized that many indicators do show steady growth. However, GDP also decreases in its growth rate, but it is 2.1%, and not 1.0% at the moment in the Eurozone. Meanwhile, industrial production is declining in America, but does not have such a negative impact on the economy as in the European Union. Thus, from our point of view, the euro logically resumed its decline, and we can only guess whether this time the “paradoxical situation”, which we have repeatedly described, will stop the decline of the euro.

From a technical point of view, all indicators are still directed down. Thus, you can stay in short positions until a rebound from any target or a reversal of the MACD indicator upwards (which can also be discharged, so you need to wait for a parallel price increase).

EUR/USD continues to move down. Thus, it is now recommended to sell euro currency with targets at levels 1.0956 and 1.0946, until the MACD indicator reverses or rebounds from any of the targets. Moreover, it will be possible to consider the purchase of the euro / dollar pair with the goals of 1.1048 and 1.1128, if traders manage to return the quotes of the pair above the Kijun-sen and Senkou Span B. lines.