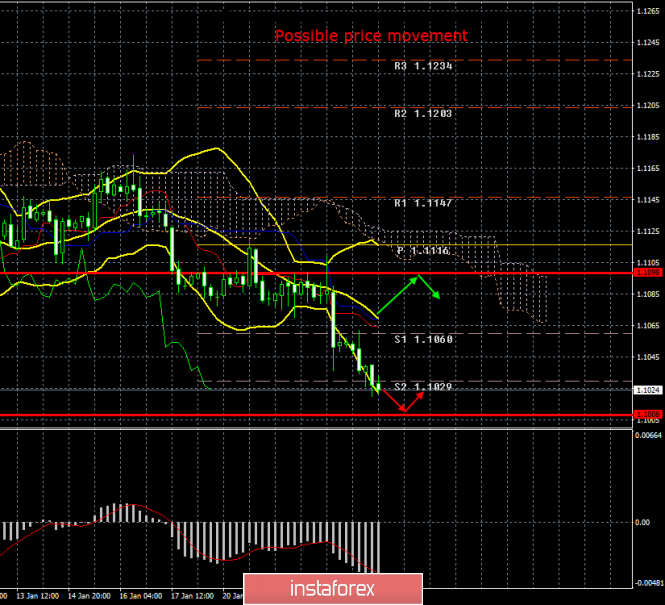 Average volatility over the past 5 days: 41p (average).

The last trading week for the EUR/USD pair ended with the resumption of the downward movement. From our point of view, what happened was inevitable in almost any case. The euro/dollar has consolidated below the Ichimoku cloud, and now nothing prevents it from continuing to move down. As we have repeatedly said, the fundamental background and the macroeconomic background are the main drivers of the pair’s fall. Due to technical factors, the euro-currency manages to adjust from time to time, and since trends are not only short-term, but also long-term, then corrections happen for several days, and for several months. However, the essence remains the same. The EU economy still looks much weaker than the US. The monetary policy parameters of the Federal Reserve look much stronger than the ECB. On the eve of the new trading week, we propose to look at such images with what macroeconomic events and publications await us.

Monday, as often happens, will be completely empty in terms of macroeconomic events. However, on Tuesday we are waiting for the publication of orders for durable goods in the United States. This is a rather important report, since the goods of this category are quite expensive, respectively, their growth or vice versa, a fall can reflect current trends in the economy. Recall that the main concerns associated with the US economy are currently in the falling business activity index in the manufacturing sector of Markit, in the PMI ISM index, which has fallen into the “recession zone”, as well as in the continued decline in industrial production. Other macroeconomic indicators are still at a decent level, but the industrial sector may begin to pull other indicators down as well. According to expert forecasts, the main indicator of orders will show an increase of 0.4% in December. A month earlier, the growth was negative -2.0%. That is, the number of orders decreased by 2%. If we take into account orders excluding defense, then an increase of 0.5% is expected, excluding transport – an increase of 0.1%, and excluding defense and aviation – an increase of 0.2%. Thus, experts expect an improvement in the situation compared to November, which, in principle, is not difficult. This data may support the US dollar.

On Wednesday, the United States will hold an absolutely passing Fed meeting. Passing – because the probability of changing the key rate is 0%. The Fed took a firm wait-and-see position, which has already informed the markets several times. Thus, traders will be able to gather important and interesting information from the Fed’s accompanying statement or from a press conference. It hardly makes sense to predict anything here, however, since there have not been any major changes in macroeconomic statistics in the United States recently, there is nothing to worry about for the members of the monetary committee. Moreover, the signing of the “first phase” trade deal between China and the United States 11 days ago, should inspire optimism in the Fed.

Insignificant reports on unemployment and changes in the number of unemployed will be published in the European Union on Thursday. Traders rarely respond to this data with purchases or selling the pair. In Germany, the preliminary value of the consumer price index for January will be published on this day, and, as before, this indicator is interesting from the perspective of forecasting the future value of inflation in the EU, which remains at an extremely low value. Furthermore, data on GDP for the fourth quarter (also a preliminary value) will be published on this day, with a forecast of +2.1% and an index of expenditures on personal consumption with a forecast of 2.1%. On this day, of course, much will depend on the real value of GDP, although it will not be final.

Well, on Friday, the eurozone GDP for the fourth quarter will be published, as well as a change in the levels of income and expenses of the US population in December 2019. GDP in the European Union remains much lower than in the United States. Forecasts predict an increase of the indicator compared to the fourth quarter of 2019 by only 1.2%.

In general, the following can be said. Most macroeconomic statistics remain stronger in the US. You should not expect any action from the Fed and the ECB in the near future. More attention now needs to be paid to a possible trade war between the EU and the US, however, it is unlikely to start right tomorrow. Since, from a technical point of view, we already have a downward trend, it will be difficult for the bulls to show something more than just a correction, even if macroeconomic statistics are strong in the EU and weak in America.

EUR/USD continues to move down. Thus, it is recommended that you either hold open shorts with targets of 1,1008 and 1,0973, until the start of the corrective movement (rebound from any target or turn the MACD indicator up). It will be possible to consider purchases of the euro/dollar pair no earlier than the traders of the Senkou Span B line overcome with the first goal the resistance level of 1.1203. All goals will be specified at the beginning of a new trading week.