The hopes of the “bulls” on the recovery of the upward trend of EUR/USD turned into lost illusions after Christine Lagarde refused to signal the imminent departure of negative interest rates from the ECB policy. Moreso, following the example of the Riksbank, statistics on European business activity during January was mixed, and the threat of a trade war between US and EU have become more explicit. Because of these, the “bears” attacked the euro, and led the quotes of the pair to the lowest level since the beginning of December.

Prior to the World Economic Forum in Davos, investors were weighing the risks of the escalating trade conflict between Washington and Brussels. Some thought that Donald Trump, inspired by the success of his protectionist policy, would not want to postpone the case, while others hoped for a negative impact on the US economy and stock market. The President, however, managed to find a middle ground, threatening EU with tariffs on imports of European cars. Trump tried to reassure investors, arguing that a serious fall in stock indexes should not be expected, as Brussels still has no way out. He will sign the document proposed by Washington.

Thanks to President Trump, the S&P 500 did not feel much fear, unlike the Eurozone and the euro. Euro’s already weak economy is not set up for a trade war, as it has just barely began to recover, as evidenced by the growth of business activity in the manufacturing sector. The service industry, on the contrary, upset Bloomberg experts, making the composite purchasing managers’ index for January disappointing as well. This prevented the EUR/USD bulls from launching a counterattack. The future dynamics of business activity will depend on the recovery of global and European GDP, as well as on whether the US will start a trade war with the EU or not. 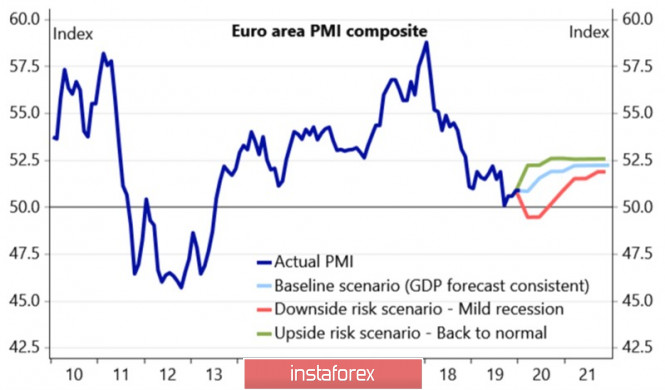 Christine Lagarde did not give anything good to euro fans either. In contrast to the December meeting of the Governing Council, when the ECB talked a lot about positive developments in the Eurozone economy, the central bank declared a long period of holding negative interest rates in January’s meeting. They say that despite the signing of the US and China trade agreement, uncertainty still remains.

I wonder how the Fed will answer colleagues from Frankfurt. The FOMC meeting, coupled with the release of data on European and American GDP for the fourth quarter, will be the main events of the week on January 31. The futures market is giving an 88% probability of keeping the Federal funds rate at 1.75%, while the chances of monetary expansion by the end of 2020 are growing by leaps and bounds. The US economy will likely to expand by 2.1% compared to October-December 2018, and the Eurozone economy by 0.2%, as compared to July-September 2019.

Technically, the daily EUR/USD chart continues to implement a combination of the Three Indians and 1-2-3 patterns. After a confident assault on the diagonal support in the form of the lower border of the ascending trading channel, the pair is confidently moving towards the target of 88.6% on the “Shark” model, located near 1,1-1,101.