Trade View - Automate your Forex System without coding a single line
Home  »  Market Anakysis   »   GBP is under pressure due to increasing threat of lowering interest rates, EUR is waiting for Lagarde’s speech, and USD receives

On Monday, US stock indexes updated record levels again, and the dollar received unexpected support after the US Treasury removed China from the list of currency manipulators

This step took place less than a day before the alleged signing of the “first phase” of the trade deal between the United States and China, and it immediately points to two significant consequences. Firstly, the markets will regard the fact of signing as a positive impulse, which will lead to an increase in demand for risky assets and a decrease in demand for defensive ones such as gold, bonds or the Japanese yen. Secondly, such a preventive step on the part of the Ministry of Finance is a clear signal that the US has managed to persuade China to accept favorable conditions for itself, which will be regarded as a factor contributing to the strengthening of the dollar even against the background of obvious problems in the economy.

Today, a report on consumer inflation in December will be published. The NFIB business optimism index, as well as the Treasury report on the state of the budget. NWO predicts a deficit growth of 1 square. 2020 fiscal year to 358 billion, which is 11% more than the same period a year earlier, the deficit is growing mainly due to faster growth in expenses. At the same time, any positive leaks about the upcoming signing of a trade agreement will be interpreted by the market in favor of the dollar.

The growth of the euro has been supported by the second largest level of the index of surprise among G10 countries for quite a while, but it has gained little benefit from the improvement in macroeconomic indicators, and further growth is in doubt.

On the other hand, inflation in the service sector is stable, while the failure in the industrial sector can be completed, which ultimately will lead to an increase in general inflation in the range of 1.7-1.9%, which practically corresponds to the target of the ECB. 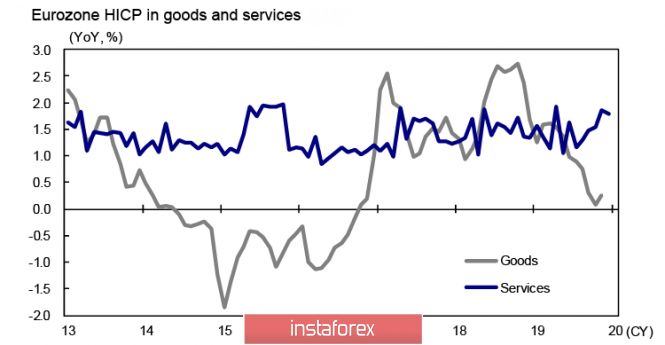 Volatility is unlikely to grow much against the background of insignificant macroeconomic data this week, and the euro will not go beyond range trading.

Meanwhile, a 5-month maximum of 1.1238 will not be updated in the short term and growth is limited by resistance levels of 1.1165 and 1.1195. Therefore, it will be able to go above the euro if Lagarde speaks in Frankfurt on Thursday to reduce risks.

The British pound is still held in the trading range, but is experiencing quite a lot of pressure. The prolonged period of uncertainty did not go in vain, and it is surprising that markets are beginning to reassess the prospects for the UK economy only now.

The NIESR Institute, in turn, published a 4Q quarter GDP growth rate estimate. 2019. NIESR sees zero growth, a decline of 0.1% in January and then resumption of growth to 0.3% in the first quarter of 2020. 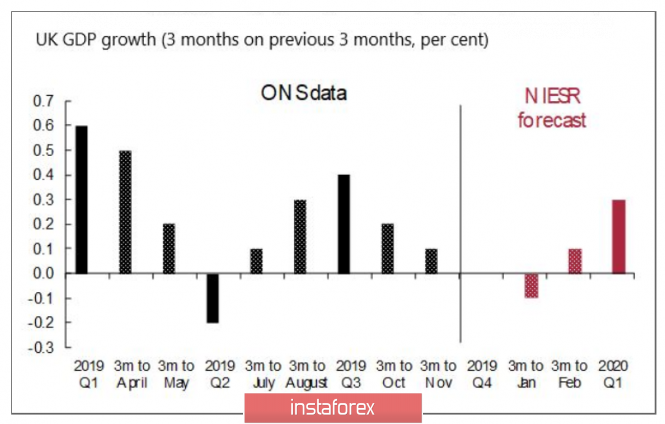 The activity in the services sector slowed down to 0.1%, and this is the worst result since 2013. At the same time, industrial production is declining, it declined by 1.2% m / m and 1.6% y / y, in November which are also the lowest levels for almost 7 years. Thus, it is not surprising that the probability of a rate cut by the Bank of England at a meeting on January 30 reached 50% and continues to increase.

According to the results of the previous meeting, the Cabinet had only two who voted in favor of lowering the rate, but recent comments indicate that the dovish camp is gaining new supporters. BoE CEO Mark Carney said last week that the Central Bank has enough opportunity to take action if necessary, while Wlige said he would vote to lower the rate if there are no signs of improvement in the economy. Well, so far, there are no such signs and they have nowhere to come from – inflation data in December, which will be published today, are expected to be at the level of November, and they cannot signal an improvement in the situation by themselves, in isolation from the labor market.

On the other hand, Sylvanas Tenreiro spoke in a dovish key a little earlier, and thus, the number of proponents of the rate cut who openly spoke about it reached 4. Now, the pound will be under pressure in the coming weeks and is unlikely to return to the growth path taking into account expectations for a decrease in GDP and possible problems in negotiations with the EU on the exit mechanism. Support at 1.2950 / 60 is a trend support from the beginning of November; this level is likely to lose and move towards 1.2905.