Trade View - Automate your Forex System without coding a single line
Home  »  Market Anakysis   »   GBP/USD. February 12. Results of the day. Great Britain will be cut off from EU financial markets after Brexit 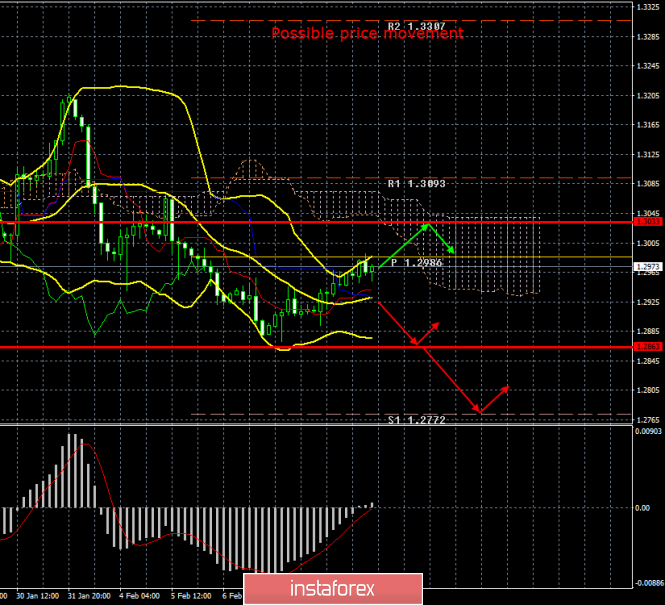 Average volatility over the past 5 days: 85p (average).

The British currency ends Wednesday, February 12, by continuing upward correction. The pound =dollar pair managed to overcome the critical line, or rather, it did without any problems. And although now the further downward movement has been called into question, it is still impossible to say that an upward trend has begun to form. We continue to believe that the UK macroeconomic statistics and the country’s prospects for at least 2020 and 2021 remain so vague that considering the long-term growth of the pound is absolutely groundless. Nevertheless, it should be recognized that the market is not always and not everything is determined by fundamental factors. A banal example: a large player enters the market with a deal to buy a large amount of pounds. He does not pursue the goal of earning exchange differences or making money on this transaction. He needs pounds sterling, for example, to buy British securities or invest in a British company. Thus, the pound may begin to rise in price, as demand for it will sharply increase, and other smaller investors can pick up this movement, which will provoke an upward trend. True, even in this case it is unlikely to be long.

Today it became known that after its final “divorce” with the European Union, the UK will lose access to the financial markets of the bloc. In principle, this is very logical, and Michel Barnier has repeatedly stated that London will not be able to enjoy all the privileges of membership in the EU, while not in the EU. It’s clear that Boris Johnson wants to keep as many of Britain’s contacts with the EU as possible beneficial to Britain, but at the same time not obey Brussels in any sphere. On the contrary, Brussels wants to tie London to itself as much as possible, and only in this case will it be ready to offer it a really good deal. Not a single important macroeconomic report was published in either the United Kingdom or the United States during the third trading day of the week. However, traders still seem to be impressed by the fourth quarter GDP in the UK. We have already said that this report did not show any increase or improvement. The GDP indicator simply did not change compared to the previous period. The growth rate completely decreased in quarterly terms. However, most traders considered the non-fall in GDP to be great news, as forecasts predicted a decline in growth rates to 0.8% y/y. We still believe that the macroeconomic statistics in the UK continue to deteriorate, and the economy slows down, and this process will continue throughout 2020. Thus, we still consider it appropriate to work out all the sell signals that Ichimoku or any other trading system will generate, since the fundamental background remains in favor of the US currency.

At the moment, the upward movement is already a priority, as the Kijun-sen line is left behind. However, before overcoming the important and technically strong line of Senkou Span B, it is not recommended to seriously consider buying the British currency. We believe that, despite the new “golden cross”, the pound/dollar pair may turn down at any moment and resume the downward trend.

GBP/USD continues to adjust against a downward trend. Thus, selling the British pound with targets at levels 1.2863 and 1.2772 can now only be possible after the price has consolidated below the critical line. Purchasing the pair in small lots can now be considered with the first goal of the Senkou Span B line, but it should be understood that the fundamental factors do not remain on the side of the British currency.