Trade View - Automate your Forex System without coding a single line
Home  »  Market Anakysis   »   GBP/USD. February 4. Results of the day. Boris Johnson wants an agreement, “like with Canada or Australia.” 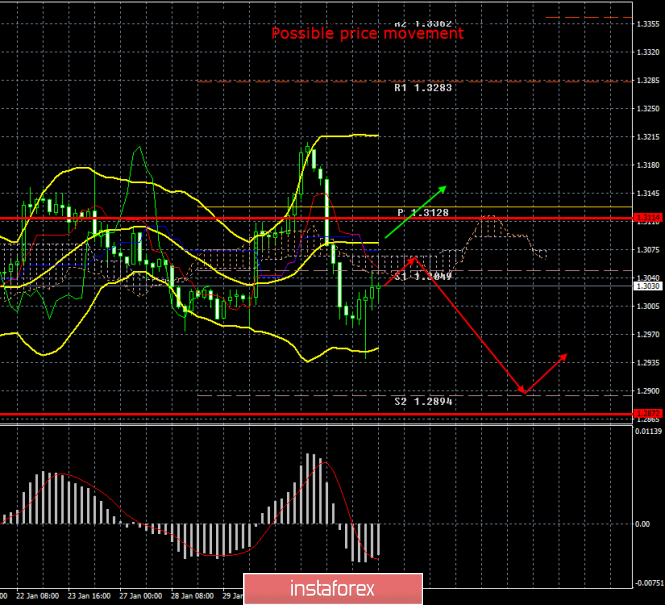 The British pound began a not too strong correction on Tuesday, February 4, but the downward trend has already been formed, so the upward movement is now the correction, and not an attempt to resume the upward trend. However, we are forced to make a much more important conclusion that the GBP / USD pair failed to overcome a strong support area again near the level of 1.3000. According to the results of today, the British currency tried to gain a foothold below, but it can be observed that the rebound from this area is expressed by a huge pin at the candle. The nearest goals for correction now are the lines of the indicator Ichimoku Senkou Span A and Kijun-sen. If the pound / dollar rebounded these levels, then the downward movement will resume with the prospect of declining to $ 1.29.

There was little macroeconomic data from the UK today, or rather, there was not at all. Thus, traders had nothing to turn their attention to during the day. All this provoked an upward correction, as market participants did not find a reason for new sales of the British pound; however, there are grounds. After all, the threat of the failure of trade negotiations between London and Brussels has not gone away. Moreover, if there was simply no information on this, then the markets would not react to this. However, Boris Johnson personally stimulates issues by making such statements, after which even the most optimists begin to have doubts about the reality of signing a deal between the EU and Britain. Meanwhile, more and more experts are starting to focus not only on the economic problems that Britain has already encountered, but also on the geopolitical problems that the UK may face. This is primarily about Scotland. Thus, the British pound now has two huge areas of potential problems. The first area is economic problems that already exist (capital outflows, business problems, financial losses, a slowdown in the economy, a decline in production and GDP growth rates, as well as a slowdown in inflation), and problems that Britain may face during the year (lack of a trade deal) with the EU, which will further worsen all of the above economic problems). The second area is geopolitics and this is a potential referendum on independence in Scotland, but quite possibly without the approval of London. In this case, riots are possible as well as armed conflict. Scotland does not want to leave the EU, does not want to follow Boris Johnson, and its ruler Nicola Sturgeon is very radical. There are also problems with Gibraltar, the sphere of influence of which is now owned by Britain, but Spain has huge claims on this territory. In addition, problems on the island of Ireland are also possible, and of a completely different nature. Starting from the discontent of various nationalist forces and organizations with the next division of the island, ending with possible problems with smuggling, illegal border crossings and others. In fact, it is Northern Ireland that will now be the “window to Europe” and vice versa. Thus, as soon as one of these problems worsens, as yesterday, for example, a problem with a trade deal the pound will immediately react with a decline to this.

Once again, Boris Johnson said today that the UK government has “made its choice” and wants to get a free trade agreement similar to that with Canada or even Australia. “If we do not succeed, although this is unlikely, then our trade will be based on the current agreement to exit the EU,” said the British Prime Minister.

Tomorrow will be much more interesting in terms of macroeconomic statistics, because the index of business activity in the manufacturing sector of the United Kingdom and the United States will be published. These data can cause high interest on the part of trailers and, accordingly, have a quite strong influence on the movement of the pound / dollar pair on Wednesday, February 5. Also tomorrow, the President of the United States is scheduled to appeal to the nation as part of the completion of the Senate consideration of the case of impeachment. At the same time, the ECB President Christine Lagarde will also make a speech.

GBP / USD has started a new downward trend. Thus, sales of the British pound are currently relevant with a target support level of 1.2894, however, we recommend waiting for the completion of the current correction (MACD indicator turning down or other signals about it). The pair’s purchases can be considered again if the price returns to the area above the Kijun-sen line with the first target of 1.3283. All targets are quite distant, and the price makes sharp turns. Thus, extra caution is recommended when opening any positions.