Trade View - Automate your Forex System without coding a single line
Home  »  Market Anakysis   »   GBP/USD. January 27. Results of the day. Analysts are certain: the Bank of England will leave the rate unchanged at 0.75% 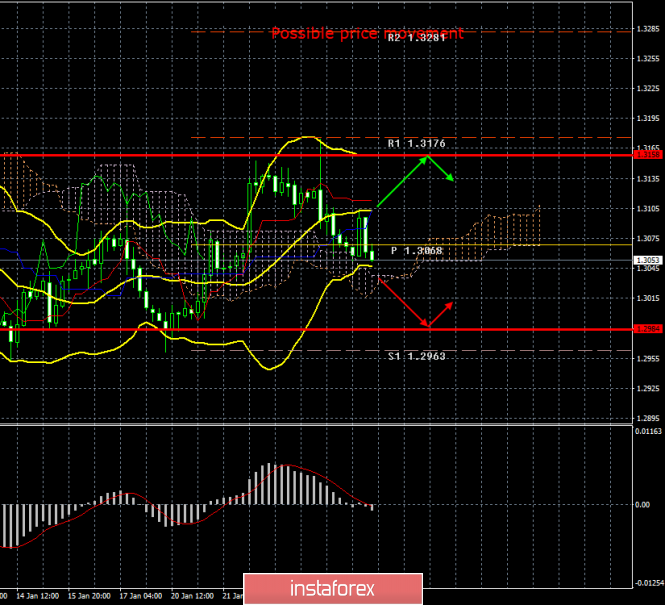 Average volatility over the past 5 days: 87p (average).

The British pound tried to start an upward correction on Monday, January 27, but “the music was not playing for long.” The pound/dollar pair managed to adjust to the Kijun-sen critical line, however, it was not possible to go above it and the downward movement was resumed, which continues at the moment. In the coming hours, the Ichimoku cloud can be overcome, which will amplify the current dead sell signal from Ichimoku. Volatilityis extremely low today and does not exceed 55 points, which, in principle, is not surprising, since no macroeconomic publications were planned for today, and there will be plenty of important events and publications this week, so as not to force events on the first trading day of the week.

A meeting of the Bank of England will take place this Thursday, at which a decision on the rate will be made. Most of the analysts interviewed believe that the monetary committee will approach the decision to lower the rate, but the number of members of the monetary committee supporting this decision will be insufficient. Michael Saunders and Jonathan Haskell, who voted in favor of lower rates at two previous meetings, may be joined by Gertjan Vlieghe and Silvana Tenreyro, who previously said they could support the decision to soften monetary policy in January. It turns out that four members of the committee can speak in favor. Four out of nine, which is not enough to lower the bid by majority opinion. Moreover, the latest macroeconomic statistics from the UK may lead some committee members to consider it a reason to wait another month or two, hoping that the economy will accelerate without the intervention of the British regulator. Experts noted that amid a temporary truce between the United States and China, the global economy has ceased to show signs of slowdown and may begin to recover in 2020. Accordingly, the negative impact will stop on the British economy. Additional negative impact for the impact from Brexit and its consequences will remain. And although we believe that it is time for the BoE to stimulate the British economy by lowering the rate, it may again remain unchanged. Moreover, the UK will officially begin the Brexit procedure on January 31. According to many economists, the management of the BoE can wait to assess how the economy will respond to all events after Brexit.

Meanwhile, Mark Carney’s replacement at the helm of the BoE was named. The new chairman will be Andrew Bailey, who is now acting as head of the British regulator for financial markets. Bailey himself said: “It is a great honor for me to be the governor of the Bank of England and to be able to serve the people of the United Kingdom, especially at such a critical moment for the country when we leave the EU. The bank has a very important role, and as the manager, I will continue the work that Mark Carney did. It is important for me that the bank continues to work for society, maintaining monetary and financial stability, and guaranteeing the integrity and security of financial institutions. “

From a technical point of view, the pound/dollar pair failed to overcome previous highs of January 7 and December 31. Thus, we believe that the pair has much more chances to continue the downward movement than vice versa. The general fundamental background, from our point of view, remains in favor of the US currency, since there are a sufficient number of topics related to the United States, the White House, and Donald Trump, but all of them have an extremely weak effect on the position of the greenback. The dollar continues to feel great as the US economy continues to feel the same. The Federal Reserve will also hold its meeting this week, in which we can learn about the plans of the US regulator in the near future, as well as track changes in the rhetoric of its representatives.

GBP/USD is trying to resume a downward trend. Thus, traders are advised to resume sales of the pound/dollar pair with targets at 1.2984 and 1.2963 after the pair consolidates below the Ichimoku cloud. The pair’s purchases can be considered if the price returns to the area above the Kijun-sen line with targets at 1.3158 and 1.3176.