Trade View - Automate your Forex System without coding a single line
Home  »  Market Anakysis   »   GBP/USD. January 27. The trading idea is being worked out. Target – 1.2995. Positive statistics from Britain did not prevent 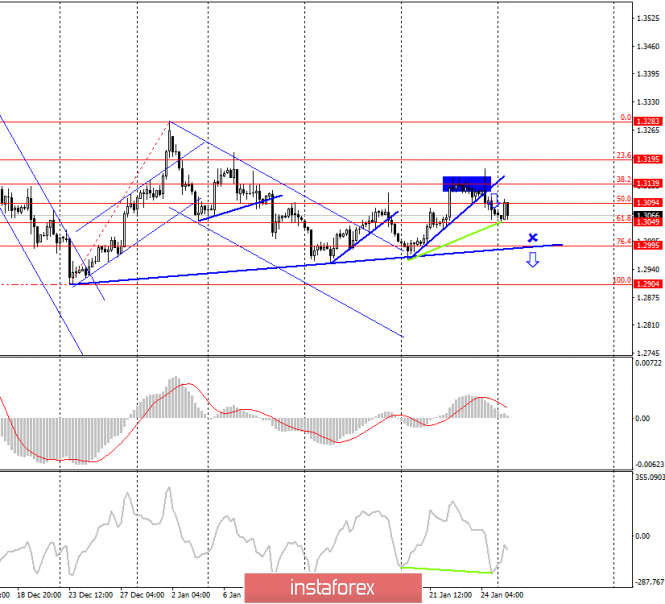 As seen on the 4-hour chart, the GBP/USD pair performed a reversal in favor of the US currency after fixing under the correction line and began to fall in the direction of the goal I announced near the global correction line and the Fibo level of 76.4% (1.2995). At today’s trading, the pair’s quotes performed a pullback to the corrective level of 50.0% (1.3094), after rebounding from the Fibo level of 61.8% (1.3049). However, the rebound from the Fibo level of 50.0% worked again in favor of the US dollar and the resumption of the fall in the pair’s quotes. Also, a bullish divergence was formed at this point, which helped the pair to start growing. The very rapid completion of growth after divergence indicates a very likely resumption of the fall. There is no information background for the pound-dollar pair today, and on Friday, it could cause the growth of the British dollar, as the indexes of business activity in the UK were higher than traders’ expectations. After working out the corrective level of 76.4%, the further dynamics of the pair will depend on the closing or rebound from the global correction line.

Forecast for GBP/USD and trading recommendations:

The trading idea is still in the sales of the pound. Near the level of 1.3139, there was a reversal with a close under the correction line. I recommend traders to sell with the goal of 1.2995, Stop Loss should be taken out for 1.3139.