To open long positions on GBP/USD, you need:

On Friday, the bulls attempted to grow, however, it all ended with another sale and a return to the lower border of the side channel of 1.3043, for which the main fight will be conducted today. Only the formation of a false breakout there in the first half of the day with a surge in volume will be evidence of the presence of buyers betting on further growth of GBP/USD. However, an equally important task will be to return and consolidate above the resistance level of 1.3081, which will throw the pound higher to the range of 1.3118 and it is likely to return it to the maximum of 1.3170, where I recommend taking the profits. If the movement continues to develop in a bearish scenario, then it is best to consider new long positions in the pair only after the support update of 1.2997, or a rebound from the minimum of 1.2963.

To open short positions on GBP/USD, you need:

Sellers will closely monitor the price behavior at the level of 1.3081, and only the formation of a false breakout there will allow us to count on a further decline in GBP/USD. An equally important task for sellers will be to return and consolidate below the level of 1.3043, which will push the pound to the lows of 1.2997 and 1.2963 and completely cancel out the entire upward momentum formed from January 20. In the scenario of the pair’s growth in the first half of the day above the resistance of 1.3081, it is best to consider sales after the resistance test of 1.3118 or open short positions immediately on a rebound from the maximum of 1.3170.

Trading is conducted below the 30 and 50 moving averages, and their intersection indicates the likely formation of a new bearish impulse in the short term. 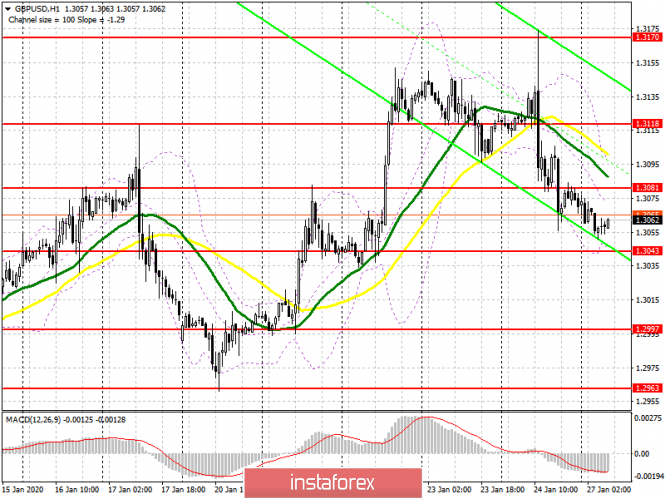