Trade View - Automate your Forex System without coding a single line
Home  »  Market Anakysis   »   GBP/USD: plan for the European session on January 28. Pound to continue falling, but only if the bulls lose support at 1.3035

To open long positions on GBP/USD you need:

The situation with the pound has not changed much compared to yesterday’s forecast, however, the bulls now have more problems than they had. The main problem is support at 1.3035, to which the pair gradually returned and only the formation of a false breakout in this range, which I doubt, will be a signal to open long positions. It is best to defer purchases until the test of lows 1.2997 and 1.2963. Given that important fundamental statistics for the UK are not published today, it is likely that the market will again be sawtooth pattern, with the demolition of intraday stop orders and the “smearing” of levels. An important goal for pound buyers is a return to resistance at 1.3085, since consolidating on this range will indicate the resumption of the upward trend of GBP/USD with updating highs of 1.3133 and 1.3172, where I recommend taking profits.

To open short positions on GBP/USD you need:

As long as trading is conducted below the range of 1.3085, pressure on the pound will be present, and the immediate target of the bears will be a low of 1.3035, consolidating below which will maintain a downward trend, which is formed from last Friday’s high at 1.3172. Breakthrough at 1.3035 will quickly push GBP/USD to levels 1.2997 and 1.2963, where I recommend taking profit. However, without good fundamental statistics for the United States, it is unlikely that a bearish momentum can be sustained. In case the pound grows in the morning, short positions can be considered from resistance at 1.3085, subject to a false breakout, but I recommend selling immediately for a rebound only after updating the high of 1.3133 and 1.3172.

Trading is below 30 and 50 moving averages, indicating that the pound could decline further in the short term. 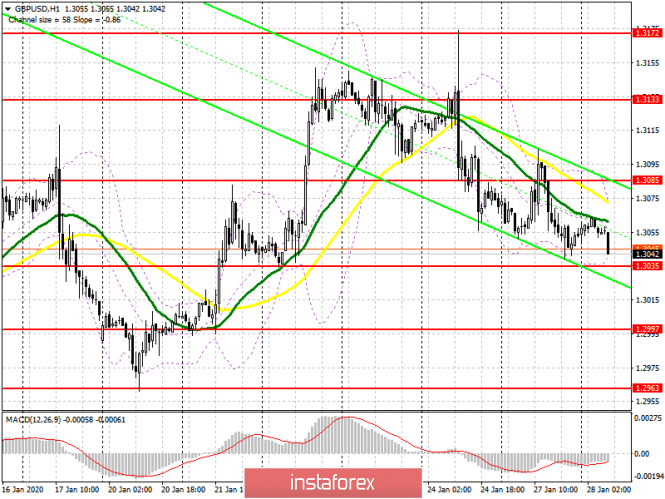