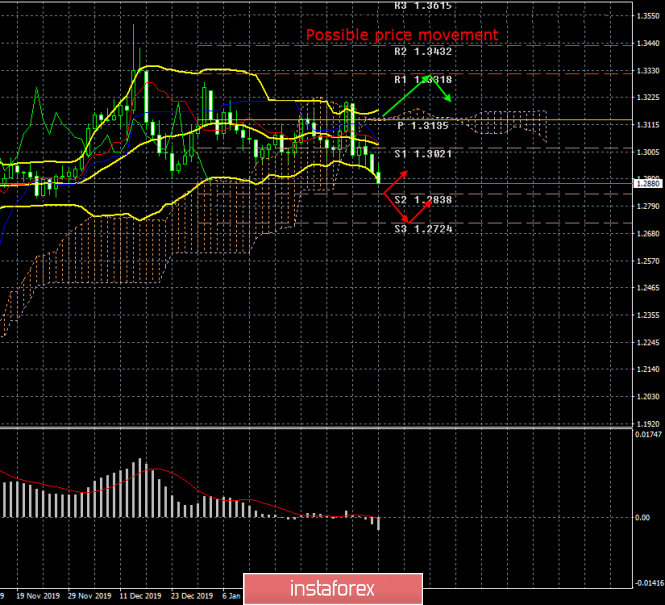 The British pound remains at the mercy of a huge number of factors that put pressure on it. Last week, the decline of the British currency resumed, as Boris Johnson very “successfully” started commenting on negotiations that had not yet begun with Brussels, immediately declaring that London could withdraw from negotiations at any time if it realized that it could not get the “deal that wants”. As a result, traders immediately rushed to sell the pound, as the UK economy continues to experience quite serious problems, which Mark Carney and the Bank of England tried to refute inappropriately at their last meeting in January, and if there is no deal with the European Union, it will just be sentence for the entire British economy. Essentially, this will mean Brexit without a deal, i.e. unordered. That is, that which the Parliament, and in particular the Labor Party, feared over recent years. The fact that the opposition forces diligently blocked, trying to prevent a destructive scenario for Britain. However, all power is now in the hands of conservatives and nothing can stop Boris Johnson from leading the country as he sees fit although it is difficult to assume what it is. Is the Prime Minister just bluffing to get the best possible deal with the EU? What is the real position of Johnson, who is ready to withdraw the country without an agreement? In any case, the pound began to decline and will continue it with virtually no options.

Now as for macroeconomic statistics in the coming week, everything regarding American statistics has already been said in the next article on EUR / USD. Here, we will focus on British publications. On Monday, no important and interesting information will be received from the UK. But on Tuesday, traders will witness the publication of monthly GDP reports for December, quarterly and annual terms for the fourth quarter in a preliminary estimate, according to NIESR GDP growth rates, industrial production, and also the volume of commercial investments. What are our forecasts? Industrial production is projected to decline by 0.8% in annual terms, GDP in the fourth quarter may add 0%, and in annual terms, growth may decline from 1.1% to 0.8%, and commercial investment is likely to decline 1.3% y / y. So, investments are declining, industrial production is declining, GDP growth is falling, the UK economy continues to lose 70 billion a year. At the same time, Boris Johnson is ready to complete the transition period without a deal. Analysts believe that negotiations with Brussels and Washington will be extremely difficult and Foggy Albion may soon face problems of a geopolitical nature (Scotland, Gibraltar, Ireland). So, what are the options for the pound with such a set of fundamental grounds?

No data is expected from the UK on Wednesday, Thursday and Friday. However, in order for the pound to continue to decline, there should be enough data from Tuesday, as well as the general fundamental background. Moreover, do not forget about American statistics, most of which are projected to increase. Do not also forget that the British currency spent the last few months either in growth or in unreasonably high positions for itself. Thus, even technical factors now speak in favor of the decline of this currency.

From a technical point of view, the Bollinger Bands began to expand down on the 24-hour chart, and the sell signal from Ichimoku “dead cross” continues to be relevant. Thus, we can see a new fall in the British currency by 500-600 points in the future, unless the UK economy suddenly and unexpectedly pleases, and Boris Johnson does not begin to do everything in order not to finish off the British economy.

In the 24-hour timeframe, the pound / dollar pair resumed its downward movement. Thus, at the moment, sales of the pound are recommended with targets of 1.2838 and 1.2724.