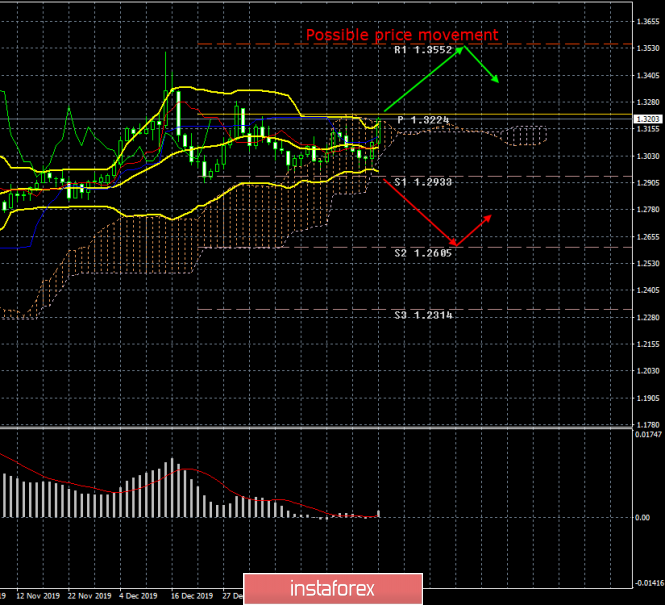 The British pound was able to significantly improve its position and as a result lost no more than 40 points for the entire month of January. Thus, January can even be called a successful month for the British currency, although the 24-hour timeframe makes it clear that an open flat was observed throughout the month for the pair. Bollinger bands, directed sideways for a long time, and in recent weeks have also narrowed to a low, also signal about the flat. The pair managed to overcome the upper Bollinger line on the last day of January, but this does not mean that the upward movement will now resume. The whole problem of the pound lies in the conflict between macroeconomic indicators, expectations and euphoria with market optimism. It is unlikely that anyone will deny the existence of serious problems in the British economy. Every trader knows that macroeconomic statistics remain one of the worst among the G7 countries. Every year the economy loses about $ 70 billion due to Brexit, which has just begun, the prospects for the British economy are very vague. Even the conclusions of the Bank of England and the retiring Mark Carney that the UK economy began to recover since Boris Johnson’s party won the elections, we consider it premature and a little naive.

In fact, the pound now remains in the positions that it won before the December 13 elections. If we carefully look at the chart, then the highest price point was reached on December 13th. Now let’s think again, and what were the reasons to buy the pound until December 13? Does the fact that the Conservative Party wins the election alone give any preferences and dividends to the British economy? A faster Brexit than it could be, somehow positively affects the welfare of British citizens? No, even if Brexit were once again postponed, and the Conservatives were not able to form a “majority government”, the UK would also continue to suffer financial losses. Someone will say that this period (financial loss) would be longer. Yes, it is possible, however, there would be more time to conclude a trade deal with the European Union. Or maybe Great Britain would not leave the EU at all. One way or another, now this is all unimportant.

The BoE meeting, which was the last key event of January, raised many questions. On the one hand, traders and analysts somewhere saw an improvement in the state of the British economy, on the other hand, almost everyone believed that the BoE’s dovish attitude would increase in January and the number of members of the monetary committee supporting the reduction in the key rate would increase from previous ones two to three or four. However, the British regulator also discerned “improvement of the situation” somewhere, or tried to convince the markets of this and left the key rate unchanged, while the number of those supporting the rate reduction did not change. It was this and only this factor that helped the British currency to rise by almost two cents against the US dollar at the end of the month and even give hope for the formation of a new upward trend. However, we still do not see any good reason for a new rise in the price of the British pound and expect a resumption of the fall.

Thus, in general, we can summarize the following:

1) Improvements in the British economy, if they have a place, are minimal.

2) The British economy still needs to be stimulated.

3) Mark Carney and company decided to play it safe in January, pretending that everything is fine, and leave such an effective tool as lowering the rate, as a last resort.

4) The economy of Great Britain may again begin to slow down in the coming months, since, essentially, nothing has changed in January.

The pound/dollar continues to trade in absolute flat on the 24-hour timeframe. Thus, at the moment, neither short nor long positions are relevant. For a 24-hour timeframe, it is recommended to wait until the lateral movement is complete. Trends are observed at 4-hour, but they are very quickly completed.