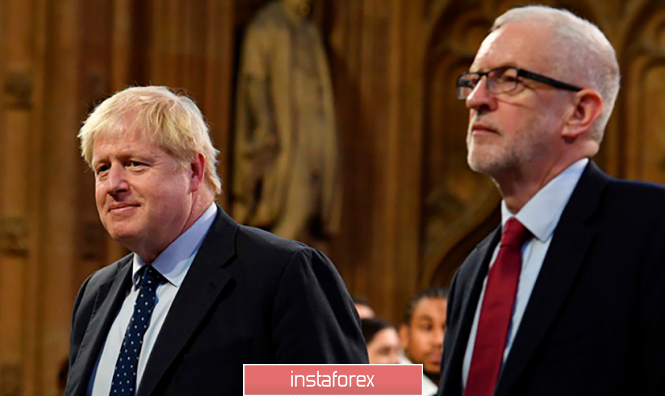 Since it’s been about a week before the elections, the main election opponents Jeremy Corbyn and Boris Johnson continue to fight against each other despite the fact that all the main political forces of Great Britain have already played the main cards and Trump cards. In principle, it is clear to absolutely everyone that the main battle for the status of the “ruling party” will take place precisely between the Labor and Conservatives. Thus, the leaders of these parties continue to seek incriminating evidence against each other, blame each other and try to expose the rival party and its leader in the most unfavorable light possible. It can be recalled that not more than a week ago, Boris Johnson quite cynically used the tragedy on the London Bridge in the fight against the Labor Party, saying that it was the party of Corbyn that was to blame for it, which approved the law during its reign. According to which convicted of terrorist activities are entitled to early release. As a result, a terrorist who attacked civilians was released from prison ahead of schedule.

Now, it was the turn of the Labor leader himself, who allegedly published a secret document, and according to which, the border in the Irish Sea after Brexit would still appear. According to Jeremy Corbyn, Boris Johnson is deliberately misleading people (respectively, the electorate), and Brexit for Johnson’s “deal” will have devastating consequences for Northern Ireland, as customs control will begin to operate on the border between it and the rest of the UK, which in fact means a tight border. Thus, Corbyn accuses the Prime Minister of lying and acting in ways that are not in the public interest. In principle, something like this can be expected from Boris Johnson. It can be recalled the story of the prorogation of the UK Parliament, through which Johnson wanted to reach an unauthorized exit from the European Union, and that parliamentarians did not interfere with him. Naturally, for the public and the media, this decision of the Prime Minister was submitted under the sauce of preparing a new government plan, and not in any way so that the Parliament simply could not block Brexit, then still “tough” Brexit. As a result, Boris Johnson misled not only the population of Great Britain, but also Queen Elizabeth II herself, who approved Johnson’s request for proprietorship.

Due to this, something similar may be happening now. It should be noted that the actions of Boris Johnson are far from always impeccable and clean, despite the fact that the Prime Minister is indeed very popular in the Kingdom. In addition, do not forget that Boris Johnson has not yet won a single significant victory at the helm of the UK. For this, he has already been convicted several times of incontinence, of trying to “bypass Parliament and the current legislation. Thus, it is entirely possible that Jeremy Corbyn is right when he talks about Johnson’s true plans. A document, perhaps is no secret or perhaps, there is no document at all. However, the fact that there may indeed be a border between Ireland after the completion of Brexit is possible. And such an option to complete the “divorce” of the UK and the EU will mean potentially big problems on the island of Ireland in the future, where only they managed to suppress riots and protests thanks to the Belfast Treaty in 1998.