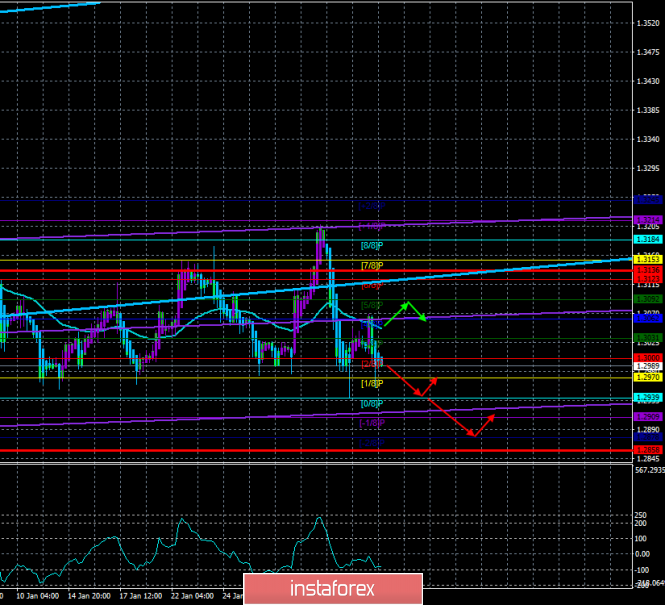 The GBP/USD currency pair is trying to resume its downward movement on February 6 after a slight upward correction to the moving average line. Traders failed to gain a foothold above the moving average, but the pair is also supported from below by the important line of 1.2978, which has not allowed quotes below it 7 times already. Thus, formally, there is now a downward trend, but its development is in doubt due to the level of 1.2978. The pound/dollar pair failed to gain a foothold above the moving average, so the bulls remain in a weak position. Now the reversal of the Heiken Ashi indicator to the top will officially confirm another unsuccessful attempt to break through the Murray level of “1/8” – 1.2970. In fact, the quotes are now between the level of 1.2978 and 1.3050 (the zone where the moving average line is currently located), that is, in a very narrow range. Accordingly, it will be better to buy the pair after overcoming the moving average and sell it after confidently overcoming the levels of 1.2978 and 1.2970.

Meanwhile, the entire currency community continues to discuss the UK’s prospects for 2020. And more experts are beginning to point out that Boris Johnson’s hopes for two free trade agreements are unlikely to come true. The first agreement – an agreement with the European Union – is already being questioned because of the position of the British Prime Minister himself, who, acting according to Trump’s methods, wants to get an agreement that will be beneficial to Britain. European Union officials, Ursula von der Leyen and Michel Barnier have already warned London that, firstly, it took at least 7-8 years to reach a free trade agreement with Canada or Australia, and, secondly, London will not receive all the preferences of membership in the EU, being outside of it. Boris Johnson himself promises to “knock out” a good deal for the Kingdom. The most interesting thing is that such a mood of the Prime Minister scares only entrepreneurs and businesses in the UK itself, who have been living like a “powder keg” in the last three years. At the same time, Boris Johnson believes that it is the EU that wants to disrupt the signing of the agreement by changing the terms of the agreements reached on the “deal” in the autumn of 2019. But does Johnson have strong arguments in negotiations with Brussels? It should be understood that half of all goods produced in the UK are now exported to the EU. Moreover, the EU is a single market with 450 million consumers; the loss of one country will not be felt as strongly by Europe as the loss of UK access to the single market without duties and quotas. Moreover, the UK has not conducted any negotiations for more than 40 years. The negotiation team simply does not have the necessary experience. In general, now we can only say that Johnson’s “hard” position towards the EU looks a little ridiculous and absurd. The world community does not understand why the British Prime Minister wants to get a favorable agreement for himself, without taking into account the position of Brussels?

But the most interesting thing is the negotiations on a free trade agreement with America. Donald Trump has repeatedly stated that he is ready to sign a “huge trade agreement” with “his friend” Johnson. However, as many experts note, the American President can promise and wish anything in words, but when it comes to official negotiations, his position can change dramatically. It is unlikely that the United States will conclude a deal that is not profitable for itself. Moreover, I wonder what position Johnson will take in negotiations with Trump? It is unlikely that he will behave like Trump in negotiations with Trump. Thus, according to most experts, Johnson will not get either one or a second deal during 2020. Most likely, the negotiations will be delayed for a longer period than 10-11 months. And the British economy will continue to shrink and slow down due to all the reasons that Brexit itself creates and the lack of trade agreements. Accordingly, the pound will continue to fall in the long term.

Thus, over the next months, we still expect to overcome the level of 1.2978 and resume the downward trend. There are almost no fundamental factors that could support the pound. The latest macroeconomic reports from the UK give hope for some recovery in the Foggy Albion economy, but even if this is the case, it is unlikely that the growth rate will be higher than in the States. This means that the balance of power between the US and British currencies will still remain on the side of the former. 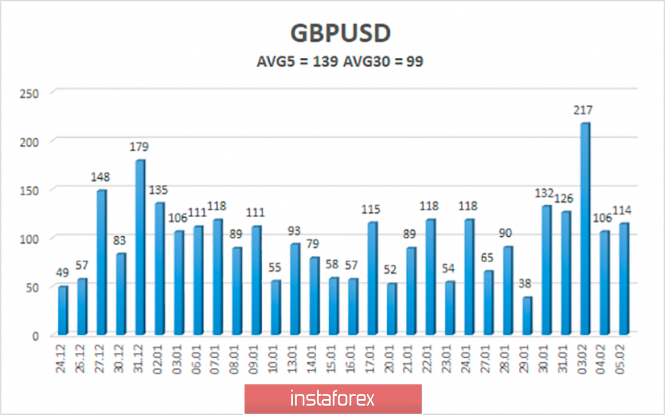 The average volatility of the pound/dollar pair has increased to 139 points over the past 5 days. According to the current level of volatility, the working channel on February 6 will be limited to the levels of 1.2858 and 1.3136. The continuation of the downward movement would be very logical, but, as we have already said, there is a very strong level of support from below. A reversal of the Heiken Ashi indicator to the top will indicate a new round of corrective movement.

The GBP/USD pair started a new round of downward movement after rebounding from the moving average. Thus, traders are now recommended to sell the pound with the targets of 1.2939 and 1.2909 before the new reversal of the Heiken Ashi indicator up. It is recommended to return to buying the British currency after the pair reverses above the moving average line with the first targets of 1.3092 and 1.3123.