Trade View - Automate your Forex System without coding a single line
Home  »  Market Anakysis   »   Overview of the GBP/USD pair. March 27. Boris Johnson has come under a barrage of criticism for “missing the moment” with 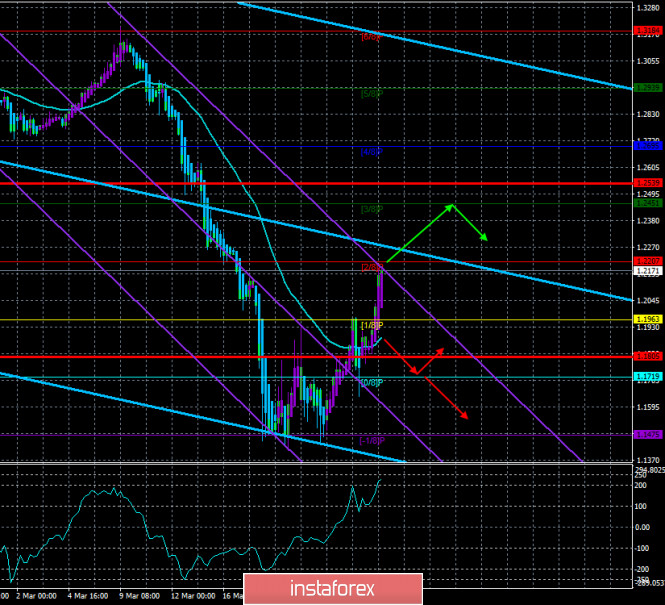 The GBP/USD currency pair worked out on March 26, easily overcame the moving average line and continues its upward movement, which is quite strong. The last day ended again with total volatility of more than 400 points. Thus, we see that the pound is recovering quickly, after an absolutely illogical fall. Now the fall of the US currency is also beginning to contribute to statistics from overseas for March. Thus, as in the case of the euro currency, the pound may soon return to the levels from which everything started, that is, in the area of 1.2900-1.3200. All topics, like Brexit and trade negotiations with the European Union, do not matter much now. What matters is the macroeconomic data from the UK and the States for March, which are slowly beginning to be available to traders.

While all the attention of traders was focused on the news and reports about the spread of “coronavirus” around the world, as well as data on applications for unemployment benefits in the United States, we can say that the Bank of England quietly held another scheduled meeting. Probably, because no changes in monetary policy were expected from the Regulator, this is certainly an important event and did not receive any attention. And it should be said quite fairly. The Bank of England, like the Fed and the ECB, has already done everything possible. Rates are lowered to 0.1%, and the quantitative easing program is expanded to 645 billion pounds. Of course, the regulator can follow the example of the Federal Reserve and indefinitely increase the volume of securities repurchase from the market and inflate its balance sheet. However, more conservative British are unlikely to follow this path. In principle, the “caution” of the Bank of England is clearly visible in its inaction during Brexit, when the British economy began to slow down, but the Central Bank was in no hurry to lower rates. In the final communique of the Bank of England, it is reported that the scale of the economic shock from the epidemic is impossible to determine now. The risk of long-term damage is present, and it is likely to be expressed by large-scale unemployment and business decline. The Bank of England assumes that global GDP will decline in the first half of the year. In addition, the Regulator assumes a serious slowdown in inflation, as well as a fall in the value of the pound. However, there is also a note of optimism in the message – “the economic shock from the virus will be temporary.”

While the British regulator is resisting the epidemic with its own monetary methods, British Prime Minister Boris Johnson, according to many experts and the media, “missed the moment” and now it will be much more difficult to contain the spread of the “coronavirus” pandemic in the Foggy Albion. Boris Johnson is accused of overly populist behavior, that he introduced a “hard” quarantine in the country too late. As a result, official data show only 10,000 infected, but health officials believe that the real numbers are much higher. In their opinion, a huge amount of data is not taken into account, a huge number of people simply do not know that they are infected, a huge number of Britons simply have not yet passed the infection test. Many British media outlets have refused to support the government of Boris Johnson and note that some Britons do not adhere to the rules of quarantine and freely walk around London – the center of infection of the British Empire. At the same time, Johnson only “encourages” citizens to stay at home and not go out without good reasons. According to many experts, it is high time to introduce a “hard” quarantine with penalties for its violation. Johnson also came under criticism for his initial desire to not resist the virus too much and allow the British population to get over it in order to get immunity. Of course, the Prime Minister did not say anything publicly, but we have already drawn the attention of traders to some of his “optimistic” statements. For example, the Prime Minister’s words that many British families will lose their relatives due to the epidemic. Scientists compare the UK with Switzerland, which has an 8 times smaller population, but about the same number of infected people, which suggests that the real figures are underestimated by British authorized persons. As in many other countries seriously affected by the pandemic, Britain’s medical sector is already overloaded. All private clinics are integrated into the general health care system. Automobile plants are directed to the production of ventilators, and alcohol plants – to the production of disinfectants. According to official data in the UK, about 500 people died from the “coronavirus”…

As for the macroeconomic statistics, which still has almost no effect on the movement of the GBP/USD currency pair, on Wednesday, March 26, the UK published the retail sales indicator for February. Even taking into account the fact that there was no epidemic in Britain in February, the indicator still turned out to be significantly worse than experts’ forecasts. In monthly terms, it decreased by 0.3%, and in annual terms it showed zero growth. Excluding fuel sales, the increase was only 0.5% y/y (with a forecast of +1.1%), with a monthly loss of 0.5%.

“Technique” shows a fairly strong upward movement, which will now be almost as difficult to stop as the dollar’s growth a week earlier. At least no important fundamental information that can make a revolution in the market is expected in the near future. We also believe that technical factors are quite important now, as market participants react poorly to the “foundation”, and technical indicators are quite confident and without false indications signal the continued growth of the pound/dollar pair. 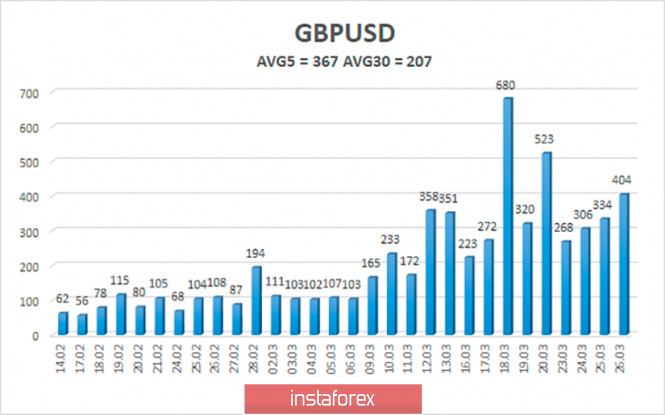 The average volatility of the GBP/USD pair has decreased slightly over the past 5 days, but yesterday it began to grow again and currently stands at 367 points. The activity of traders on the pound/dollar pair remains extremely high, which should be taken into account when trading this pair. On Friday, March 27, we expect movement within the channel, limited by the levels of 1.1805 and 1.2539. A downward turn of the Heiken Ashi indicator will indicate a downward correction.

The GBP/USD pair continues to move up on the 4-hour timeframe. Thus, purchases of the pound with the targets of 1.2451 and 1.2539 are relevant now. The movement is strong, so you can exit the longs by turning the Heiken Ashi indicator down. It is recommended to sell the British currency with the target of 1.1475 if the bears manage to overcome the moving average. We remind you that in the current conditions, opening any positions is associated with increased risks.

Possible variants of the price movement: