Since today is Friday and the weekly trading ends, it means that you can pay attention to USD/JPY currency pair.

Previously, when the interest rate on the US dollar was much higher, this currency was considered a risky asset, while the yen, as far as I remember, has always been a safe-haven currency. When investors are drawn to risk, the dollar-yen grew, and when the market is negative, it declined.

Now that the US refinancing rate has been lowered three times in a row, it is not as clear as before, so I suggest that you go to the price charts and consider the technical picture for this instrument. 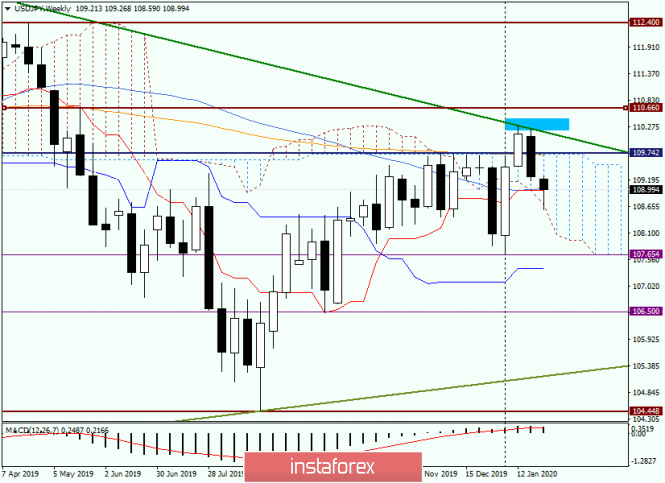 Last week and the week before, the euro-yen met a strong barrier for further growth right on the green resistance line of 125.29-110.29. Thus, we can conclude that this line was built on the correct points, and this causes a sense of satisfaction. But that’s not the point now.

At the moment, USD/JPY has entered the limits of the Ichimoku indicator cloud, but the further decline is held back by the 50 simple moving average and the Tenkan line. As you can see, at the moment, there is a strong rebound up from these indicators. It is not yet known how long it may last (or whether it will last at all), as well as what the current weekly candle and its closing price will be in the end. It is not excluded that it will be performed in the form of a reversal model of candle analysis, and in this case, we can count on the growth of the euro-yen, which may be quite significant.

The descending scenario will be signaled by the exit of the cross down from the cloud to the Ichimoku indicators, then the pair will go to the support area of 107.65, on the ability to break through which the prospects of the EUR/JPY pair rate will depend. Now, let’s move on to a smaller period. 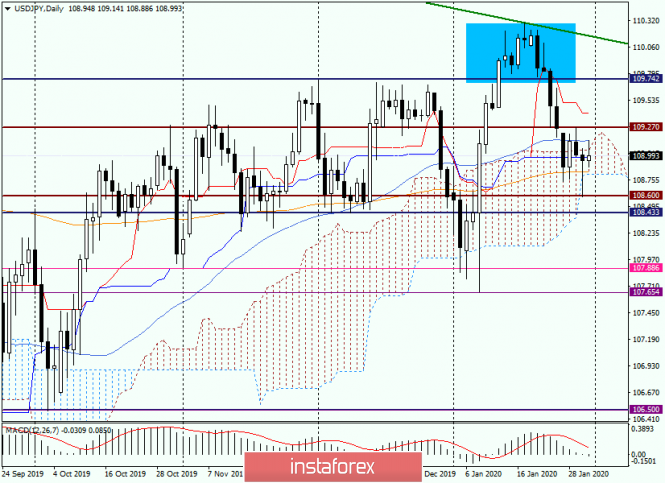 Here the picture is mixed. In yesterday’s trading, the pair fell within the Ichimoku cloud, which is not good for the prospects of further growth. However, the long lower shadow indicates the heroic attempts of the euro bulls to raise the rate and return the quote to the area above the upper border of the cloud.

It did not work out a bit, although the candle for January 30 may well be considered a reversal, that is, bullish.

Just today, after yesterday’s candle with a huge tail, we are seeing the strengthening of the EUR/JPY rate. At the moment, the pair has already made attempts to get out of the cloud up, but the strong Kijun line of the Ichimoku indicator is an insurmountable obstacle. It prevents the pair from going up from the Ichimoku cloud and testing the resistance of sellers at 109.27. But even the breakdown of this mark will not clarify the situation completely. The fact is that there is a Tenkan line at 109.41, which can provide strong resistance and turn the price down, making the breakdown of the resistance of 109.27 false.

With this development, everything will be very bad for the euro-yen and there will be a high probability of a decline, and quite intense. Let’s move to the USD/JPY trading plan.

At the moment, the main trading idea is buying. However, I do not consider it appropriate to open long positions under the resistance in the form of the upper border of the cloud and the Kijun line. You either need to wait for the Kijun breakout and buy on the pullback to this line, or it is risky and aggressive to buy from 109.00.

I wish you success and profits!