From a comprehensive analysis, we see the formed stagnation after the quote approached the periodic level of 1.2885, and now about the details. Last week was extremely strong in terms of the downward trend, and the number of points passed (319 points) was not as important as the fact of the breakdown of the control levels of 1.3000-1.2900, which represented a break in the existing clock cycles. So, a new week has come, and stagnation comes with it, which reflected not the reverse course but a kind of price-fixing beyond all previously announced control levels. Do not forget that fixing the price at the value of 1.2885 reflects not only the area of autumn 2019 but also the average level of the range of 1.2770//1.2880//1.3000 where the quote came from. It turns out that we have returned to the stage of the range of 17.10.19-03.12.19, where the quote was suspended a period earlier. Thus, it is too early to talk about a full recovery, since only a breakdown of the level of 1.2770 would give the first signal, and a price fix lower than 50% relative to the cured of the entire medium-term upward move (1.1957-1.3513) would confirm this signal. Do not be discouraged, current achievements are worth a lot, together with external factors, and we still have a chance to see something more, on which we will be able to earn a lot.

In terms of volatility, we see that the same activity is recorded for three consecutive days, which may signal several factors. So, one of the theories says that a kind of slowdown with characteristically similar activity can signal the confirmation of a breakdown of an important coordinate, where the price is fixed at new values. Another theory suggests the uncertainty of market participants who have not yet managed to believe in the breakdown of the control level.

Detailing the past day by the minute, we see the initial rebound from the area of 1.2885, just in this course we could see the entire daily activity, 10:30-15:30 (time on the trading terminal). The subsequent fluctuation was in terms of a partial return relative to the rebound, where the day ended with another consolidation.

As discussed in the previous review, traders continue to hold short positions that were opened at the time of the break of the control levels. The logic of this retention is clear to me: everyone is waiting for more significant changes. In turn, speculators work on local jumps that appear on the market daily.

The news background of the last day did not include statistics on the United Kingdom and the United States.

In terms of the general information background, we have a nagging fear of the upcoming negotiations between England and Brussels regarding trade relations. So, during a recent meeting in the European Parliament, a new tone was set for the upcoming negotiations, where members of the European Union believe that the UK should follow strict conditions on unfair competition, fishing, and human rights after the 11-month transition period after Brexit, according to the draft negotiating mandate of the European Union.

At the same time, the EU wants to force the UK to continue to comply with EU rules in areas such as state aid, even if the bloc changes them in the future. These plans are tougher than those set out by the European Commission last week, and all these actions could lead to inflaming tensions with London ahead of the talks.

“We are not ready to make a deal at any cost. We will defend the interests of the EU,” EU chief negotiator Michel Barnier told reporters in Luxembourg on Monday. 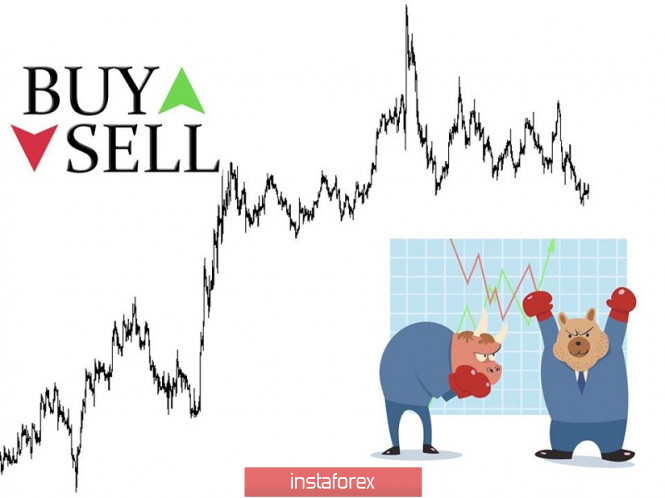 Today, in terms of the economic calendar, we had macroeconomic data for the UK, which locally supported the pound. So, GDP figures slowed from 1.2% to 1.1% with a forecast of 0.9%, the positive factor in the negative. After that, everyone paid attention to the trade balance, which is full of surplus and amounted to 7.7 billion pounds. Everything is positive since industrial production data show a deep slowdown of -1.8%.

In the afternoon, we are waiting for data on vacancies (JOLTS) in the United States, the number of which should grow from 6.8 million to 7.0 million.

Analyzing the current trading chart, we see that the overnight consolidation was replaced by a local surge in the activity, which is normal if we also take into account the fact that the statistical data for Britain was published. It is worth noting that the oscillation frame of 1.2872/1.2960 is still standing, which signals that the quote is fixed and is a good sign. If we reduce everything to the fact that the tact has changed, then we fall into the framework of a new tact, which reflects the range of 1.2770//1.2885//1.3000. It turns out that the return of the price to the level of 1.3000 will not change the overall picture of a possible decline in the future.

From market participants, we see a temporary restraint, possibly related to the price-fixing process. At the same time, speculative interest is still high.

By detailing every minute of the period, we see the same consolidation, relative to which there were local bursts of activity, which did not disrupt the overall dynamics in any way.

In turn, traders continue to work on the decline, although they do not exclude the fact that a rebound back to 1.3000 is possible in theory. Those who had excessive risk in positions partially came out at the average level of 1.2885, which was the right move. In terms of the speculative transactions, work on the jumps with the entrance on the market continues to bring profits.

Having a general picture of the actions, it is possible to assume that the main focus is on the range of 1.2770/1.3000 as a new tact in development. At the same time, the fluctuation to the lower limit will occur if the price is fixed below 1.2870, and the change in the tact will be considered if the price is fixed below 1.2770, but this will be discussed in the following reviews. 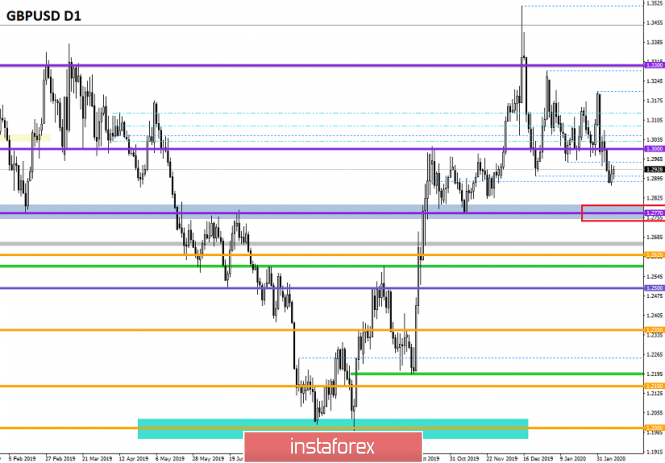 Based on the above information, we will output trading recommendations:

– Sell positions are already being held by traders towards the level of 1.2770. If we do not have positions, it makes sense to wait for a new move with the price closing lower than 1.2870.

Analyzing different sectors of timeframes (TF), we see that due to the process of fixing the price in the new cycle, the indicators of technical instruments on the minute and hour segments have a variable interest. At the same time, the medium-term period invariably signals sales. 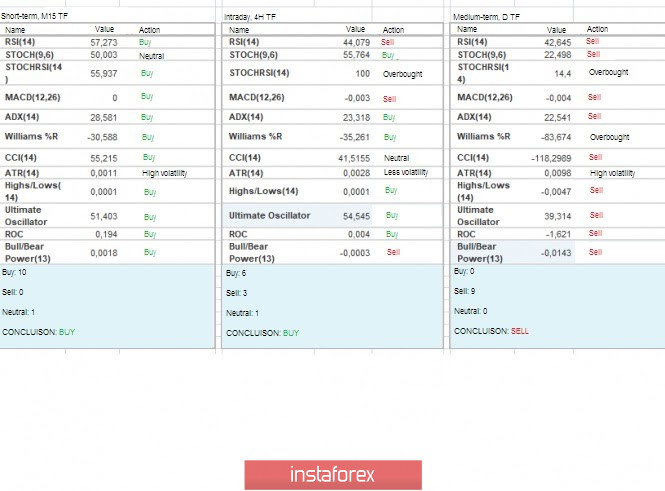 The volatility measurement reflects the average daily fluctuation, based on the calculation for the Month / Quarter / Year.

The volatility of the current time is 48 points, which is a low value for this period. It is likely to assume that if the fixing process continues, the volatility will remain at the level of the past three days. After the completion of the stage, fixing and moving to the development of a new tact can give the market activity. 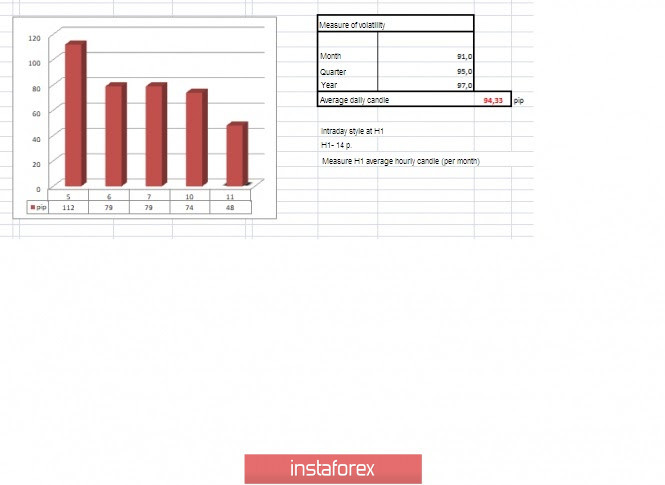 **** The article is based on the principle of conducting a transaction, with daily adjustments.